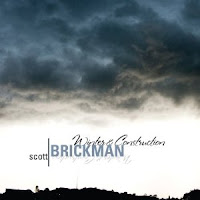 Scott Brickman composes music that is modern (and/or post-modern) in ways different than the norm these days. The harmonic language is not quite blazing avant. It is (twelve) tonal in an expanded way, mostly more linear than vertical. The musical syntax has a kind of original logic. He explores intervalic relationship not so much as Stefan Wolpe or Ruth Crawford Seeger did, but in common with them there is a discursive flow and at times a playful quality, an exploration of tones unfolding in time, though this is serious music.

His CD of compositions, Winter & Construction (Ravello 7823) gives us a good earful of his music, seven pieces written between 2003-2010. The music is scored for piano, guitar and violin in various combinations, from his Piano Sonatas Nos 2 & 3, through to a piece for solo guitar and one for solo violin, a piece for violin and guitar, and two trio works for all three instruments.

Throughout the music is distinguished by the sensitively appropriate playing of Nathanael May on the piano, Matt Gould on the guitar and Beth Ilana Schneider-Gould at the violin. The latter two have recorded a number of CDs as Duo 46 and also previously appeared in tandem with Nathanael May (see this blog and the Gapplegate Guitar blog for review postings). They have a natural easiness and unpretentious matter-of-factness in their deliveries, collectively and individually, that seem just right. They strike me as the near-perfect exponents of these works.

And the works themselves are sincere, eloquent testimonies to Brickman's straightforward style and refreshing take on modernity.

The music speaks with lucidity, charm and convincing elan.