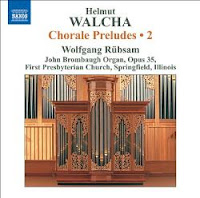 Helmut Walcha (1907-1991) wrote so many chorale preludes for solo organ, Naxos is planning to release four volumes. Judging by Chorale Preludes, Volume 2 (Naxos 8.572911) with Walcha student Wolfgang Rubsam at the keys, this will be well worth the effort.

Walcha grew up in Leipzig and learned much from the example of J. S. Bach. The Chorale Preludes have a contrapuntal flair, thrilling dynamics, and an architectural clarity about them that show the influence of the master yet also have Walcha's dramatic inventive compositional personality stamped upon them.

Like Reger's contrapuntal writing for solo violin, Walcha's Preludes extend the influence of Bach with an immediacy that shows much more than imitation at work.

The Volume Two bears up very well after many hearings. Rubsam does the music full justice and the spectacular sound will give your ears and your system a good workout.