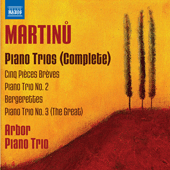 I once was confident that I knew Bohuslav Martinu (1890-1959) and his music, that I had his style down cold. It turns out that things were rather more complex than I thought. I was being exposed to his mid-to-late orchestral/choral works, because that was very much around on LP at the time, and the trademark style of those works were readily recognizable and characteristically original.

Now that I am a bit older I am being exposed to his chamber music. I have found there is much more to know. From what I am hearing, he allowed himself greater leeway on the chamber side.

This is certainly the case on his Piano Trios. A fine version of the complete opus by the Arbor Piano Trio is just out on Naxos (8.572251), and I've been listening with interest. His No. 1 (1930) has a modern scherzo playfulness quite charming. No. 2 (1951) is heavier in texture, Eastern block modern neo-romantic in dramatic terms. The final movement has an appealing motility and deft thematic development.

"Bergerettes" (1939) has some wonderful tonal intricacies, with some five movements of (mostly) joyous abandon. The No. 3 (1951), dubbed "The Great", has much passion, a stern sort of Slavic-lyric effusiveness, and plenty to occupy the ear.

The Arbor Piano Trio have given us a reading of these trios that has rhythmic drive--and emotive swelling (when called for) that remains coherently linear and does not obscure the significant form these works have in good abundance.

It's music of depth, well-played. You'll hear a side of Martinu less present in the larger-scale works, very intimate and direct. With all of the trios here on one disk it's a good bet.