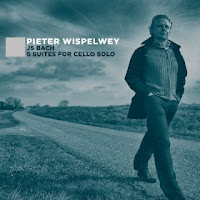 Those who love the cello and those who love Bach (sometimes, even often, that may be the same person) will find themselves in a very good place with Pieter Wispelwey's new re-recording of JS Bach's Six Suites for Cello Solo (EPR Classic, 2-CDs plus bonus DVD). He covered them in the past when he was younger. But clearly he has pondered the music and his involvement with it since then and as he has grown into the music, his performances have taken on some of the profound wisdom one can glean with the years passing.

As the DVD documentary 392 (that comes with the set) makes clear, he has thought much about Bach's suites, their place and reception in the time in which they were written, the relation between "authenticity" and "expression", and other things as well--which the documentary covers quite interestingly.

For the recording he has tuned his cellos down to A=392, which when combined with gut strings and a baroque-style bow, give the cello and piccolo cello (the latter for Suite 5) wonderful resonance and a sound a little more like the gamba, all of which he exploits to the maximum poetically.

He approaches each movement with a great deal of care and passion. Some have an exciting rapidity that puts them nearly into cadenza territory, others are played with a ruminance and depth that bring out nicely the inner Bach.

In all cases Maestro Wispelwey gives us a marvelously characteristic performance: sometimes very beautiful, sometimes very jaunty, sometimes acerbic and with great expression. Each movement sings with a vivid presence, instantly recognizable after a few auditions.

The very insightful 52 minute documentary DVD shows nice footage highlights of his concert rendition of the suites at Oxford University. There are also fascinating demonstration-discussions of the cellist with Bach scholars Laurance Dreyfus and John Butt on the performance choices Wispelwey has made and the historical position of Bach and his suites in the baroque/after-baroque world.

This is Bach from the inside out. It's a marvelous performance. Get this one and you will be changed, enthralled, transfixed, enlightened and enraptured, I think. Bravo! Brilliant!