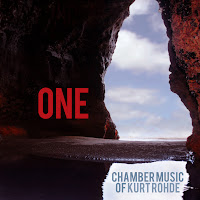 Kurt Rohde is that most precious of commodities, the self-taught composer. I say precious because to develop as a productive practitioner of the compositional arts, it becomes increasingly rare that one does not go through the conservatory/university system, at least in the areas of chamber and orchestral music.

Kurt Rohde has done just that. It goes some distance in explaining his originality. One (Innova 839) is a recent volume devoted to his chamber music. The Left Coast Chamber Ensemble, the Empyrean Ensemble, and soloists (including Kurt on viola) do a fine job teasing out the intricacies of Rohde's style, which is neither strictly modernist nor post-modernist in the usual senses.

Four works are presented, together giving a good aural picture of the spectrum of musical sounds that comprise the Kurt Rohde universe.

The title work "One: For Speaking Pianist on Texts of Jacob Stein" combines nicely a complex kinetically-charged piano part and a rhythmically parallel chant-recitation of the poetic text. Genevieve Feiwen Lee performs her role convincingly.

"Four Remixes for Piano Trio" is a rather zany yet quite formidable work. There is lyricism, rock-pulsating insistence for one movement, and a quote from the Beatles' "Maxwell's Silver Hammer" all convincingly woven together into a four-movement tapestry.

Thank you to Innova for making this vibrant music possible for us to enjoy. The San Francisco concert scene is lucky to have Kurt Rohde as a resident. He has much talent. I hope we can hear more of his work. For now this volume is a keeper.