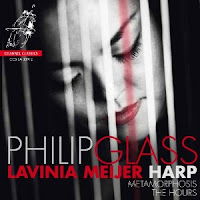 I'll be frank. There are times when the music of minimalist titan Philip Glass hasn't done much for me. Some time after "Einstein on the Beach" he simplified his style in many cases. There could be a rhythmic devolvement, a melodic-harmonic banality to some of his work.

To my surprise and delight, harpist Lavinia Meijer has taken some of that very music, arranged it for harp from the piano solo originals, then played the works enchantingly, convincingly. Her recording of Metamorphosis and The Hours (Channel Classics CCS SA 33912) brings out the ever present motility and archaic qualities of Glass's later music in ways that sound beautiful on solo harp, at least as played by Lavinia.

It's an hour of Philip Glass the way he might have sounded in Ancient Greece, say, which really does do justice to the straightforward music by adding the resonance of the harp, recorded beautifully, played with conviction and sensitivity.

Much recommended. Now I want to hear more from Lavinia Meijer. As with some of Glass's music, patience and being in the right situation are necessary. I'll have to wait for the new one!