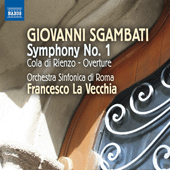 Some music lovers, myself included, get pleasure making new discoveries--in the case of classical music, finding composers and works off the beaten track, music that adds to the understanding of a period and gives you something new and worthwhile to hear.

For those with that tendency I present Giovanni Scambati (1841-1914), and the new Naxos disk devoted to his orchestral music (Naxos 8.573007). Here's a romantic/late romantic who was admired by Grieg, Wagner and Saint-Saens. Toscanini conducted his first symphony often, so the CD back cover informs me.

The disk pairs the Symphony No. 1 with the overture "Cola di Rienzo." The latter is a 20-minute piece of great color and grandeur, beautifully orchestrated, showing some Wagnerian influences in the overall sound but thematic originality and a sure hand.

The Symphony No. 1 in D major, Op. 16, follows. Five movements of contrast and epic splendor, I suppose you could say, fill out the disk. It's a work with all the depth of a well-conceived symphony of the era, played with enthusiasm and elan by the Orchestra Sinfonica di Roma under Francesco La Vecchia.

This music is a definite find. On the basis of the recording Sgambati compares very well with others, Italian or otherwise, working at the turn of the century. His music shows the hand and ears of an original of his era. This disk belongs in your collection if you champion forgotten gems, and for the serious student of late romantic symphonic works. Aside from that it is very enjoyable to hear.