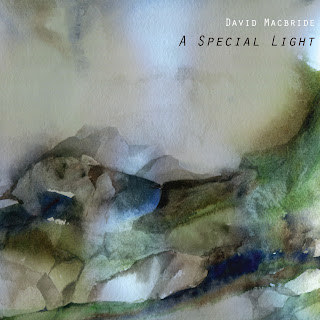 Some composers' music you might call DIY, or home-made. At the extreme is someone like Harry Partch who invented all the instruments and wrote the music for them with his own intuitive sense. I suppose Moondog would be in that category. Of course Charles Ives remains the most effectual and dramatic in what he did in defiance of his teachers--and the world as it existed at the time.

David Macbride seems to me in the home-made category too, judging from his music on A Special Light (Innova 886), a collection of 12 modern chamber works with varying configurations, all done Macbride-style. His own identity--with a Chinese mother and Scottish-rooted father--has given him a kind of flowing persona that helps him make his music singular. These are recent works of the past decade, works that reflect one way or another Chinese "musical and cultural traditions", in his own words.

Back to the "home-made" for a minute. It's not that the music sounds unschooled or naive, just that Macbride resolutely goes down his own path. There are aspects of his music that have ambiance in a radical tonality kind of way, such as the opening title work for piano and glockenspiel. There is not enough repetition to qualify as minimalist, and that more certainly gives his music its own thrust. The music has an almost folk quality, yet, no, it's rooted but also a bit wayward.

"1X4" and "1X8" are for cello and three or seven prerecorded cello tracks, respectively. They encapsulate an individual melodic linear sense, a modern counterpoint and spatial sensibility. There are three excerpts from "Percussion Park", what he calls his "communal music", a situation where the audience has some say as to the outcome of the work in performance. Beyond that there are additional percussion pieces, "Kelet" for violin and piano which recalls Chinese erhu music on the violin and also features pentatonic passage on the piano reminiscent of music for the guqin (a kind of Chinese zither). Then there is "Ave Maris Stella" utilizing 1/4 tones and other advanced techniques for the oboe and accompanied by an improvised percussion part. The latter work sounds more typically avant garde than many of the pieces here. All this shows you that he is more intent on expressing himself than in following the well-trodden, absolutist stylistic routes others may choose these days.

In all this there is a refreshing, plastic notion of "home". David Macbride has multiple "homes" in the origin sense and freely opens himself up to the possibilities of his multiple-heritage. But perhaps more importantly the music is all his. It is as unpredictable as it is fascinating.

A Special Light opens us to a spectrum of creative insights and achievements that are what David Macbride's music is all about. Recommended!