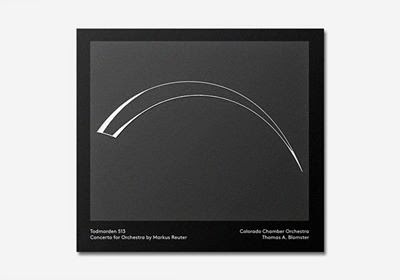 There are some works that even if you only hear a couple of minutes of it at first, you know there is something special going on. That's how I felt when I watched the You Tube video of the first performance of Todmorden 513, Concerto for Orchestra (7D Media 1414).

It all started when progressive-avant-rock touch guitarist (The Crimson ProjeKct, etc.) Markus Reuter was fooling around with algorithms on his laptop one day. He hit on one where he was able to generate 513 different three-note chords (if I am not mistaken). From this he tried to work out an arrangement and sequence for a small electric instrument configuration but the music was too complex to sound properly with this combination.

In the end he and Thomas A. Blomster consulted together, the result of which was a full orchestration of the musical sequence where for sound color purposes a medium-sized orchestra was divided not into the usual sections but by a number of smaller cells, a string quartet, trio, etc. The seating arrangement of the orchestra was changed to reflect these groupings. The Colorado Chamber Orchestra was assembled to run through an initial reading of the piece. After several revisions to the score and intensive rehearsals the orchestra performed the premiere last year. A recording session followed and now Todmorden 513 can be heard in all its subtle glory on a CD and DVD, the latter providing a 5:1 surround mix and a video documentary on the realization of the work.

It is a work like none other--though it sounds like what Morton Feldman might have written had he advanced to a new stage. In a way it sounds like everything a minimalist composition leaves out! There are endless modulations in harmony stated in sustained chords as well as arpeggiations. The long piece has a hypnotic quality, a ritual meditation on the possibilities of orchestral sound as an endlessly unwinding sky with light winds, with every cloud floating by different yet built of the same substance.

Reuter's conception and realization is brilliant; Thomas A. Blomster's orchestration is equally so, and the performance is dazzling. This, I am confident, is one of the most important orchestral works of our era. It is neither backward looking to the choppy sea of classical modernism nor is it contemporary in the usual ways we might find today. It is one-of-a-kind, like Terry Riley's "In C" but in its very own way.

You must surrender yourself to the sounds and give up expectations of thematic entertainment. This is in real-time like other musics but has more of a feel of the universe in perpetual motion than a local narrative event. It is exceedingly beautiful in a way that may exasperate the impatient, but then classical modern music is not generally fabricated for those looking for quick and easy thrills. The thrill will be there when you open yourself up, but you must allow the music to enter your mental world on its own terms.

This is a triumph. More than that it is brilliant, a breakthrough in form and sound. It belongs in the collection of anybody serious about understanding the most modern modern music. I tell you true. My wife liked it, also, which tells me it's not just a specialized sort of thing for the egghead weirdos out there like me! So do not hesitate!