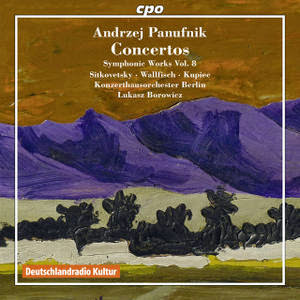 The centennial of Andrzej Panufnik's birthday (1914-1991) has brought us a spate of rather remarkable recordings, many covered here (type his name in the search box above for those). Today, another. This one is Volume 8 in the Deutschlandradio Kultur series of "Orchestral Works", namely a compendium of three Concertos (CPO 777 687-2).

All three are from his fully mature, later period, a Violin Concerto from 1971, Cello Concerto from 1991, and Piano Concerto from 1961/1972/1983. The Konzerthausorchester Berlin under Lukasz Borowicz sound fine indeed and give the music a characteristic flourish that seems right. The soloists rise to the occasion.

The Violin Concert was written originally for Yehudi Menuhin. Panufnik tried to emphasize spiritual and poetic possibilities rather than pyrotechnics, building long melody lines for the violin using simple intervallic relationships--basically the major and minor third of a triad in well-conceived permutations. The violin soars above the string orchestra throughout. The work has a somewhat moody character but brings to us a singularly singing quality well realized by soloist Alexander Sitkovetsky and the orchestra. It is in its own way a masterpiece, once of Panufnik's most appealing.

The Piano Concerto is more virtuoso-oriented, with poetic qualities, bravura and at times an almost jazzy immediacy, especially in the rousing, restlessly modulating perpetual motion of the final movement. Ewa Kuplec excels in the piano role, with great energy and poise. The first movement was newly composed in 1983, the rest thoroughly revised in 1972.

The Cello Concerto is the latest of the three works, written in 1991 with Rostropovich in mind, who gave the premier. The music is conceived as a sort of structural palindrome, though to the naked ear it all sounds through-composed. Raphael Wallfisch renders the solo cello part with grace and intensity.

So we have another volume in the series, one of the very best. The three works do much to convince us how Panufnik never flagged, went his own way, and lit up the musical world with his own brand of brilliance when all was right. These concertos are sterling examples of that and the performances leave nothing to be desired. Very recommended.