Michael Jon Fink, From A Folio 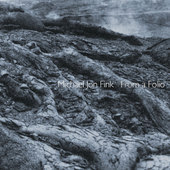 A tantalizing slab of post-minimal, radical tonality enters our ears (or mine, anyway) today. Michael Jon Fink returns (see posting from October 16, 2013) with a 18-minute EP of music for cello and piano, From A Folio (Cold Blue 0039).

It is the opposite of formulaic. You can't be sure where the music is going but you know it will linger there a little while, then move on. Seven very brief pieces form a kind of suite, each one exploring an overlapping set of patterns that go slowly and sensitively to some beautiful tonal realms but not simplistically so. There are slow ostinatos or melodic slowly quasi-arpeggiated phrases in the piano that evolve, cello suspensions and long tones, sometimes multiparts (overdubs) that create lovely chordal spellings and then move to others equally lovely but not following a road of cliche. There are slowly twisting melodies that see themselves mirrored in the dual instrumentation but never in the exact same musical image.

Fink's From A Folio gives us music of transparency, of slow shimmering sunsets, of repose, of deceptive simplicity that comes across initially as tranquil mood music but on repeated hearings has sophisticated grit and compositional substance.

It is one of those Cold Blue albums that eventually haunts you, 18 minutes to contemplate the "being here" of carefully unwinding pastoral magic.

I have come to love this music for a number of reasons. There is a deliberateness along with an expressive depictiveness. Nothing is what it seems at first, and yet it does not change from listen to listen. You do.

Thank you Derek Stein, cello, and Maestro Fink, piano, for these beautiful performances. And Maestro Fink for the considered musical vision.