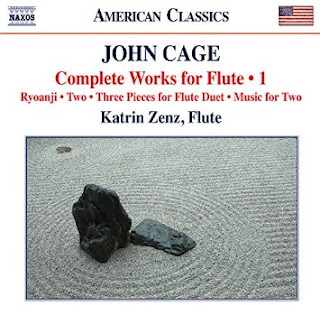 John Cage's music is like a Zen rock garden. The elements, one way or another, are apparent. It is the arrangement of the elements that one can contemplate, see the apparency but then meditate on how each element relates. If the rocks are moved and the raking of the sand is redone, there is something new there to apprehend on various levels. This is as true of Cage's music as it is of some other modernist composers and also has something to do with the experiencing of various kinds of abstractions and juxtaposition in the modern visual arts.

I've long felt that way. The John Cage Complete Works for Flute I (Naxos 8.559773) literalizes that with the image of such a rock garden on the cover and a piece ("Ryoanji") named after a rock garden in Kyoto.

Many of Cage's works can vary radically from performance-to-performance, since the choice of instruments and their configuration, the choice of notes or sequence and the combining of works played simultaneously are often left up to the performer(s). That makes each recording often enough something unique.

Flautist Katrin Zenz with her compatriots give us the first in a two-volume complete Cage flute collection with a creative and successful approach that furnishes us with nicely appropriate versions where applicable and lively interpretations where the music is fully a given.

The first volume covers a wide range of works from 1935 through 1987, the early and the late, essentially.

A most valuable addition to the Cage opus is a rare performance (to me) of his very early "Three Pieces for Flute Duet" (1935), written when he had not settled on a given approach but nonetheless provides three charmingly chromatic-modern yet lyrical movements played nicely by Zenz and Uwe Grodd.

"Ryoanji" (1984) is realized in a version for flute, percussion and tape. It was originally written for oboist James Ostryniec. The principal part follows the visual contours of one of the rocks in the garden, with glissandi and pitch relations mimetically representing the shape. There are times when the shape overlaps in terms of multiple contours, and so in those instances the flute was split into a live and a taped version or at times two taped plus one live track for a three-way sonance. There is a ritualistic percussion part that represents the sand surrounding the rocks. This is one of the more overtly Zen works in Cage's catalog. It is music for contemplation, like the visual aspect of the rock garden for which it is named.

"Two" (1987) is the first of Cage's later number pieces, with music for flute and piano each presented with ten time-brackets, one fixed and the others variable. What results is a synchronous/a-synchronous series of overlappings of piano chords and quiet, low toned flute notes. The result is music with some modern dissonance but enmeshed in a world of contemplative detachment.

The final work on the program is "Music for Two" (1984/87). There are parts for 17 instruments but beyond the piano part, which is foundational yet variable, the realization of various parts for voices and instruments can collate for a large ensemble or, as here, can be restricted to a small chamber ensemble, in this case a two-person version for flute and piano. Each part has a number of performer choices built in. The current realization/arrangement by Zenz constitutes a premiere recording. It is 28 minutes of atmospheric Cagean "suchness." It is a worthy, idiomatically Cagean realization with special flute sonics and a slowly unfolding quiescence.

All in all this first volume gives us a good deal of the contemplative side of Cage. There are dissonances, tonal ambiguities and an atmospheric mix of sounds and silences in much of the music to be heard. The performances are quite beautiful and Zenz' artistry is at the forefront. Katrin Zenz has beauty of tone, imagination and a thorough grasp of extended techniques and their application to these works where appropriate.

It is modern avant garde music with an overall gentleness that should appeal to those who shy away from the turbulent stridency of some high modernism, yet it is landmark Cage nonetheless, and will undoubtedly be appreciated by Cage enthusiasts (those like me) as well.

Volume two is due out shortly. I will be reporting in on it soon enough. Meanwhile there is this fine first volume. Definitely recommended.