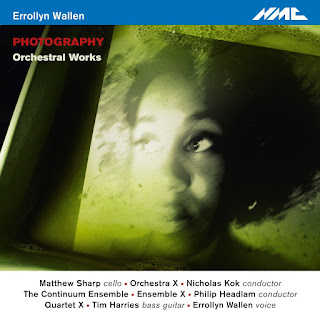 Living composer, UK based Errollyn Wallen has, as John Butt puts it in the liners to the album at hand, a special knack "to digest conflicting styles and ideas, close and distant, and embodying for us something of the complexity of our world." This we hear readily and purposefully in her recent Photography, Orchestral Works (NMC D221), a collection of four pieces written between 1996 and 2015. Each of these is a presentational singularity, an expressive modernity that is in the end tonal but in the expanded sense. There is drama and an approach to form in each and a quality of communicativity that gives her music the potential to be readily understood and appreciated by a broad spectrum of listeners.

She happens to be a woman of African descent, which surely is a matter of importance to her, though if one heard the music without knowing I do not think that the music would jump out at you and shout identity, though perhaps a close listen with all that in mind would reveal something of her roots culturally. To me the music speaks as music, modern classical music of an original sort, and that's as far as my ears need to go for now, as it is music not readily or primarily a music of identity unless it is of a world identity.

Indeed the works here occupy a place on the horizon of contemporary modern classical, each in its own way making a case for a particular, singular voice in a general zeitgeist of our present time. The title work "Photography" is a good place to begin, perhaps. It is a four-movement work meant to give you the feeling you have when you look at a collection of photographs more so than a single image. There are commonalities. The first movement has a dance-like quality, the second is a homage to J. S. Bach, the following movements connect to the first two as a kind of furtherance of the feeling of the music via convergences and divergences. Orchestra X under Nicholas Kok give us a good reading of it all, as they do of the "Cello Concerto" that opens the program.

Matthew Sharp is the solo cellist for the latter, happily. It all has something of the expressivity-emotive flourish of romanticism perhaps, only decidedly contemporary in the end, an abstraction that takes advantage of Sharp's way with virtuoso, rhythmic and lyrical possibilities and then in turn maps out how that relates to a rich string-orchestra backdrop. Certainly the work affirms Wallen's strong affinity with the string idiom but also her ability to construct vivid music out of such familiarity.

"In Earth" is an uncanny combination of string quartet, effects laden bass guitar and some moving vocals by the composer. It is based on early music derived harmonic movement but made very Wallen-like through an insistence and a heightening one has to hear to appreciate.

"Hunger" is played here by Ensemble X and the Continuum Ensemble under Philip Headlam. It is the first in a series of works Errollyn wrote between 1996 and 2000, each the product of a "Snapshot" in her mind of an imaginary landscape. The music has dramatic fullness that is better heard then described. It is in its very own way quite beautiful and intriguing. If there is a bit of the motor insistency of Stravinsky now and again, it is more for the benefit of a Wallenarian statement than a borrowing per se. It is an element of her vocabulary that she uses to advance her own meaningful ends.

After a fifth hearing, I am increasingly intrigued with the music, I want to hear it yet again, and then again. That is in part because Ms.Wallen's music is filled with things that resonate and give you a certain feeling of recognition that you have been to places like this before, only as you hear it all again it reveals a totality which is something much more than the first listens might suggest.

She is a modernist with her own internal compass of what seems and sounds right to her. And so we gain increasingly from exposure to it here.

Errollyn Wallen explores her own experience of the world and self in ways that make her an original. Hear this music. I strongly recommend it.