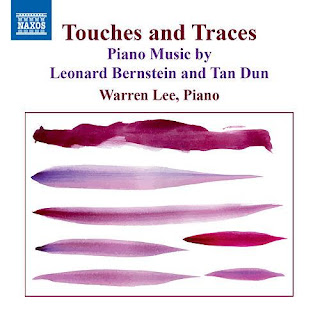 Of course Leonard Bernstein and Tan Dun are not primarily known for their solo piano music. But they have written some very worthwhile works in that vein, some of the most interesting of which we can enjoy as very well-played by Warren Lee on the album Touches and Traces (Naxos 8.70252).

Bernstein's "Four Anniversaries" (1948) and "Five Anniversaries" (1949-51) are part of a larger series of incidental character pieces Bernstein wrote over the years to commemorate and portray select people in his life, their connection and importance to him. So we begin with a miniature for Chilean-born actress Felicia Montealegre, who was to become Bernstein's wife in 1955, and from there he celebrates a varied group that includes composer David Diamond and composer-pianist Lukas Foss. The music is bright and creative, exemplary of  Bernstein's quasi-neo-classic modernism of the period, very pianistic and expressive.

More formal and ambitious is his later work "Touches" (1981), which begins with a chorale that receives eight nicely conceived variations before a summing up in a final coda.

Tan Dun's "Eight Memories in Watercolor" (1978, rev. 2002) gives us a set of characteristic miniatures that function in evocative terms not unlike Bernstein's "Anniversaries," only they are stylistically more modern-impressionistic and incorporate traditional Chinese musical evocations at times, and of course reflect Tan Dun's special sensibilities. Each miniature depicts an imaged painted scene, such as "Missing Moon" and "Ancient Burial." They are like the Bernstein "Anniversaries," evocative without being overtly programmatic.

Tan Dun's "Traces" (1989 rev. 1992) is akin to Bernstein's "Touches" as a more formally serious work, in this case meant to exploit dramatic percussive figurations and long-formed sound color invocations. It is a series of impressions from a bus trip Tan Dun took through the mountainous region of Southern China.

"Dew-Fall-Drops" (2000) sets out a very ambient landscape of quiet piano sounds played with the fingertips and the pianist's nails brushing against the strings. It is the most coloristic of all the pieces, a product of Tan Dun's mature fascination with timbres and soundscapes that has been very much a part of later modernism in general but of course takes on its own significant sound characterization in Tan Dun's very original world. A hallmark of Dun's later approach is here reduced to a set of gestural essentials inextricably intertwined with the modern piano and what it can do.

The music in sum gives us Bernstein and Dun in a series of somewhat spontaneous sketches, then in more carefully long-formed attention to possibilities of piano expression. They understandably contrast in their stylistic approaches yet both show a pronounced affinity with the piano as a special vehicle for their fertile, inventive musical ideas.

Warren Lee brings to us a beautifully poetic approach to each composer's take on their 20th century world. All the subtleties and dynamic nuances of the works come to us readily in Lee's hands, so that there is in all cases a synergy of musical idea and poetical execution that allows us to experience each work in near ideal terms.

Musical gems, finely performed. It is a beguiling program, two versions of piano modernism on display in all their contrastive originality.