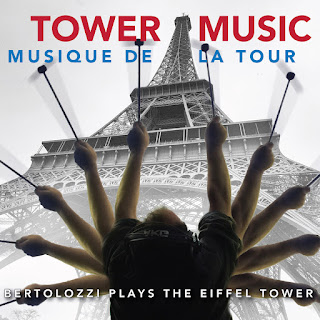 What might have been too complex and involved in the analog era can be possible in the digital age. Composer-performer Joseph Bertolozzi began with a dream, a rather outlandish one, which in the digital recording-editing world was feasible, if nevertheless quite daunting. What if he could turn the Eiffel Tower into a gigantic musical instrument? A metalophonic orchestra? The edifice is constructed of many variously resonant parts. What if he sampled each accessible metal surface with various striking devices, from variously tipped mallets to large blocks of wood? Could the results be digitally sequenced into some kind of cohesive music?

The answer is a resounding yes as we can readily hear on the resultant CD Tower Music, Musique de la Tour, Bertolozzi Plays the Eiffel Tower (Innova 933).

The initial sound sample gathering was complicated enough. Bertolozzi, armed with an array of striking objects, a recording engineer with a portable digital recorder and contact microphones, and several assistants to help document the source of each sound and whatnot began exploring virtually every accessible section of the tower, finding a diverse set of resonant metallic surfaces which Bertolozzi experimented with, finding one or more suitable percussive sounds which were then recorded (sampled) and filed away for later reference and use.

Once the team had more or less exhausted the possibilities, Bertolozzi retreated to his digital workstation. He began to group the individual sounds according to sound classes, in effect assembling a series of instruments, their natural scalar components classified together as raw materials for the compositional segments Bertolozzi later painstakingly assembled by sequencing melodic, rhythmic and timbre class sounds, in effect constructing the melodic-rhythmic particularities as he "orchestrated" them.

The result is a series of movements for the Eiffel Tower as a complex orchestra of metallic sound-instruments.

Of course all this would have remained merely interesting if the musical imagination of Maestro Bertolozzi and the technically demanding construction of the music via meticulous editing were not quite up to the challenges involved. No fear. It turns out that the nine segments of music presented on the disc are all beautifully conceived and realized, an acoustic-electric maze of beautiful sounds and stirring melodic-rhythmic singularities. Occasionally one is reminded of gamelan music, the music of Harry Partch, various classic percussion works composed for conventional instruments, and even John Cage's prepared piano pieces. But these are merely reference points on the way to some exciting original music.

In the end your ears take over, hearing a totality of orchestrated sound rather than the discrete elements that made up the finished whole. But one is never totally unaware of course of the incredibly musical sounds that Bertolozzi found the Eiffel Tower capable of, so in effect you listen with two musical minds.

It is a remarkable achievement and a wonderful listen to boot. It is a seminal example of what can be done today electro-acoustically, given the tremendous amount of labor entailed and the lively musical mind of the composer.

This needless to say is music you should hear. It is infectiously rhythmic and exotic in ways virtually anyone would appreciate. Rather amazing, this.