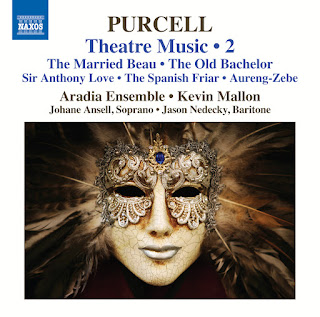 I don't suppose very many readers need to know that Henry Purcell (1659-1695) was England's most accomplished and well rounded baroque-era composer, both prolific and profound. He was called upon often enough in his career to write music for the theater. The Aradia Ensemble has culled some extraordinary but rather obscure music written by him for such settings. Just now comes their second volume of it all, Theatre Music 2 (Naxos 8.573280), and a fine thing it is.

Overtures, song, dances and some musically set dialog variously grace various works. We get a full selection from "The Married Beau," "Sir Anthony Love," and "The Old Bachelor," plus single songs from "The Spanish Friar" and "Aureng-Zebe." It is music of great charm, lyricism or jauntiness in turn, performed beautifully by the Aradia Ensemble under Kevin Mallon, with soloists soprano Johane Ansell and baritone Jason Nedecky in fine form.

It is first-rate Purcell all the way and hoorah for Naxos and Aradia for bringing this music to us. I have not as yet heard volume one but I imagine it is equally compelling.

Anyone who loves the baroque performed well and authentically, anyone who appreciates Purcell or would like to know his music better can do no wrong with this volume. It is a treasure.

I am in the process of moving and so will not be able to post for about a week. See you then!
Posted by Grego Applegate Edwards at 4:24 AM