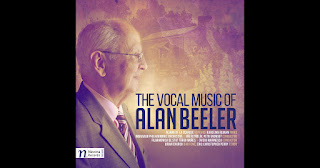 Alan Beeler wrote music of character. On the four works contained in the new anthology The Vocal Music of Alan Beeler (Navona NV6049) we can hear that readily. He comes through as an American composer in the grand modern Americana lineage, akin to Copland, Harris, Barber, in the tradition but with Beeler's own original voice, tonal and sometimes extra-tonal, both home-spun and sophisticated at the same time.

Sadly Beeler passed away on April 28th of this year so the album in effect has become a memorial tribute.

We have the pleasure of hearing four distinctive works, each with special and memorable qualities. "The Sutton Songs" captures the vivid recollective poetry of  Dorothy Sutton with a song cycle featuring the nicely wrought vocals of soprano Aliana de la Guardia and the sensitive accompanying pianism of Karolina Rojahn. It is a very inventive cycle, worthy to take its place alongside the very best of post-romantic American examples.

"Symphony No. 3: 'Shaker Hymns'" is a choral-orchestral gem that immediately recalls Copland and "Appalachian Spring," which famously makes use of the Shaker "Simple Gifts." Nonetheless Beeler carves out his own reworking, development and extension of other Shaker staples with well orchestrated and well conceived choral-orchestral declamatory interchanges. The Targu Mures State Philharmonic Orchestra and Chorus under Marinescu sound right and committed. It is a beautiful work, showing Beeler's fluidly confluent way with the Shaker melodies.

Next we have a baritone and orchestral setting of Lewis Carroll's "Jabberwocky" with Brian Church taking on the vocal role well and the Moravian Philharmonic supplying the dynamic backdrop. The idiom is more firmly placed within modern melodic-harmonic territory yet Beeler remains himself, ever lucid in his construction of projective, attractive vocal settings that showcase the verbal content with a special coherency and the feeling of musical inevitability that on reflection is a product of Beeler's fluid ease and eloquence.

"Inhuman Henry" sets the A. E. Houseman poem in modernistic terms, playful, advanced in extra-tonal ways and flowing well with the text and its own development. Eric Christopher Parry in the solo tenor role and the Moravian Philharmonic do a bangup job with this concluding work.

So the album gives us some four very accomplished and moving works, well performed, forming an excellent introduction to Alan Beeler for the newcomer to his ways, and standing on its own at the same time with strength, lyrical charm and, yes, character.

A real prize is this. Strongly recommended.