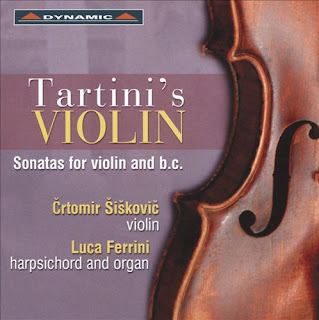 Giuseppe Tartini (1692-1770) was one of the major innovators in the Italian baroque and the rise of virtuoso violin practices that are still with us today. One of the prime outlets for his violin style was in a series of Sonatas for Violin and B.C., which we can hear four excellent examples of (out of the some 200 Tartini wrote) on the recent CD Tartini's Violin (Dynamic CDS 7744) as performed by violinist Crtomir Siskovic and Luca Ferrini on harpsichord and organ.

Siskovic plays the four sonatas (in G minor op.1 No. 10, in G minor "Il Trillo di Diavolo," in A major "Pastorale", in B flat major "Staggion bella") with gusto, lyricism and a nicely baroque mix of trills and impeccable execution. Luca Ferrini does a fine job on harpsichord and, interestingly, on organ for one sonata.

Before the baroque revival came upon us last century, Tartini's sonatas were consigned to oblivion, all except the "Devil's Trill" ("Il Trillo di Diavolo"), which we hear nicely done on this program. It was taken up by most virtuosos in the 19th and 20th centuries, with greatly variable degrees of authenticity in the arrangements, until the mid-century or so when period performance practices increasingly came to the fore. With the baroque revival came a new attention and appreciation of Tartini's entire opus. We can hear in the four sonatas performed here just how fresh and relevant the music sounds to us today.

This is as authentic and spirited an approach to Tartini as you could wish. It glows with charm and expressive punch. Highly recommended!