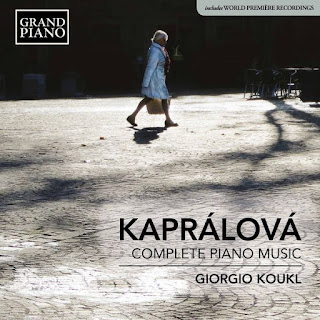 Vitezslava Kapralova (1915-1940) led a brief life but marked it by writing music of an individual, modern nature that alas only gives us a tantalizing but fully formed glimpse of what she might have been. The Complete Piano Music (Grand Piano 708) shows us both a robust and paradoxically a delicate sensibility, a maturity of approach conjoined with a youthful impetuosity, all of which seems in retrospect to compensate for the all-too-short musical and physical life she lead. The back of the jewel box to this CD states that she is "now considered the most important female Czech composer of the 20th century." I find no reason to disagree.

Giorgio Koukl gives us an impassioned and well burnished performance of these gems. There is a quasi-romantic veneer to the earliest especially, a touching impressionistic lyricism that breaks through with a near breathtaking loveliness (hear the "April Preludes") and a budding modernist-folkish originality that has a strong Czech component but as a whole creates a world we would not otherwise know.

There is a good deal to absorb in the 65 minute playing time of this CD. of eleven works, four never before heard in recorded form, ranging from 1931-32 when she was but 16-17 years old, to some of her very last works of 1938-40. The music gradually becomes somewhat daringly modernistic in keeping with the flourishing of the Czechoslovak Republic prior to WWII, of a piece with that world but singularly showing her own brand of things.

There is some connection to Janacek to be heard, though never in some obvious way. Indeed, her father Vaclav Kapral was a pupil of the master composer. But in the end this in its finest moments (and there are many) is irredeemably Kapralovian. a young talent following her own muse. It is one of the 20th century's tragedies that she was to make it only to age 25, apparently a victim of Typhoid. The world lost what might well have been a major voice in the music. As it is there are strong intimations of more than mere mortality, some really beautiful works for us to savor and retain in our ears.

It is all here, all of the piano music. I am captivated with it and I would bet you would be, too. Some 77 years after her death we can still feel the musical pulse quickening in her aural self. Eerie, tragic, but triumphant for what little chance she had to give us her musical vision and what she left for us to contemplate. Appreciate that we are here to experience her music now. Not every life is long!

Very recommended.
Posted by Grego Applegate Edwards at 5:47 AM