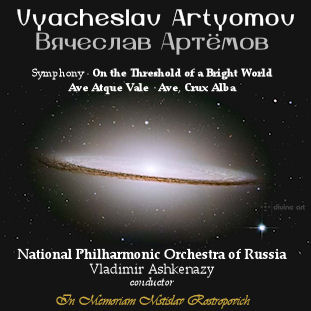 From the brilliant musical mind of Russian composer Vyacheslav Artyomov comes another volume of orchestral works including the monumental Symphony, On the Threshold of a Bright World (Divine Art 25143), very stirringly performed by Vladimir Ashkenazy and the National Philharmonic Orchestra of Russia.

I reviewed another volume on these pages several months ago (see search box above) which was nothing short of revelatory. This new volume confirms that first impression. Artyomov is a major figure on the Russian new music scene, with an explosively modern pallet of mystical, mysterioso universes of sound, a basic sensibility that goes back to Scriabin and Messiaen but then carries it forward to today with true originality.

Two substantial works comprise this additional volume: the title work "Symphony, On the Threshold of a Bright World" (1990/2002) and "Ave Atque Vale" (1997), for percussion and orchestra. A brief bonus work closes off the program, "Ave, Crux Alba" (1994/2012) for choral group and orchestra.

The Symphony has a vast spatial expanse as its foundational premise. The orchestra bursts forward with huge modern clusters and quieter introspective interludes. It is landmark in its dramatic thrust, sounding great as a CD and one can imagine even more spectacular live.

"Ave Atque Vale" has a singular role for solo percussion, handled deftly by Rostislav Shatayevsky. An immersively contrasting  aural dimension is the way forward, marking out yet another, more reflective but no less enthralling spatial-sonic universe.

"Ave, Crux Alba" ends the CD with a brief but memorably anthemic lyricism.

Like the volume previously discussed here, this one beautifully carves out for us a celestial mysteriousness and at times a hugeness that holds its own as some of the most bracing and original music of our times. Artyomov is a voice for today, ultra-modern, futuristic and vibrant in its consistent aural brilliance. Get this one! Get both!