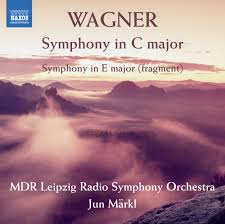 Wagner (1813-83) changed everything. His major operas brought a new way of thinking about motives and Tristan helped usher in the modern period via the pushing of harmonic language to the borders of tonality. His orchestration was bold, daring and insightful. But his concentration on opera left the purely symphonic realm to others. Composers like Bruckner came along and in part applied Wagner's innovations to the non-vocal worlds. Of course Bruckner and Mahler (and Richard Strauss) did a great deal more than that, but they were nevertheless indebted to Wagner for where they went. And so, for that matter, was Schoenberg, but that brings up more than we can handle for this post.

Interestingly enough, Wagner in his early years did write a bit of symphonic music. The two works that have come down to us, The Symphony in C major and the Symphony in E major (fragment) are available in a new Naxos release by the MDR Leipzig Radio Symphony Orchestra under Jun Markl (Naxos 8.573413).

The back of the jewel case tells us that these two symphonies "stand as a tribute to Wagner's passion for his great idol Beethoven," And indeed, one hears such elements clearly throughout. They were student works, written when Wagner was in his teens and early twenties. They are remarkable for that.

But even at that early date there is something rather Wagnerian happening with these works--which may only be to say that Wagner sprung from the Beethoven ethos. But no, one gets glimpses of something further along, even if in infancy. The E Major is a fragment. Felix Mottl completed the orchestration much later. Wagner was nowhere near where he would ultimately be. Yet neither of these works seem immature fluff; they are if nothing else supremely serious undertakings. The C major is the more involved of the two, as one might imagine even before hearing.

There is thematic originality to be heard within the Beethovenian mode. Some parts seem pretty closely derivative but then there can be developmental sections that go their own way. In the end this music is of extraordinary interest to those who know the mature Wagner intimately.

Yes, you can hear the kernels of the later composer here. But you also hear a thematic naivete that was the Wagner of those years, a not unattractively expressive and talented youth saying what he could.

The music brings a goodly amount of delight. These are no masterpieces but they weather surprisingly well. Anyone who wants to trace Wagner's development will find this CD enlightening, but also a good listen in itself.