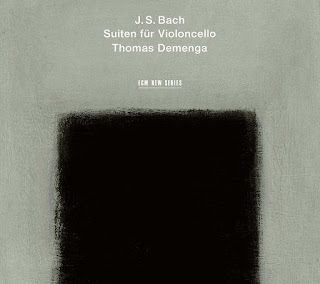 There has been a flurry of activity, a spate of recordings of Bach's justly celebrated Suiten fur Violoncello. It was considered a masterpiece for centuries, yet unlike say the "Brandenburg Concertos" was not as widely appreciated by the general public as it seems to be now. But then there weren't so many versions available in the recorded medium as there are today.

Part of this has to do with a contemporary musical stance that appreciates a bare, unadulterated solo intimacy that contrasts with the past emphasis on making an unholy din in a world of giganticism, though of course that possibility is not so much in eclipse as it is now more emphatically one way of expression among many. Silvestrov's contemporary solo cello music is a great example of the micro-ensemble currency that thrives today. See yesterday's review of that music on this blog. Of course solo piano music has been ever in demand among classical listeners since its advent, but the solo string instrument seems ever more an object of heightened interest and acceptance.

The very latest recording of Bach's Suites, beautifully performed by cellist Thomas Demenga (ECM New Series 2 CD: 2530/31), realizes the full scope of the multiple movement music in ways that help raise the bar for flowing, singingly lyrical yet briskly robust versions. The full artistry of the cello solo has never been quite so apparent as here. This performance is not merely a kind of lab for aspiring cellists as it is a totally realized, deeply living and breathing art form for anybody and everybody who wishes to be uplifted by the master composers of our heritage. I have reviewed on these pages one or two other recordings of the Suites that reach similar heights, but all in all this current set has a consistency that is hard to match.

Demenga previously recorded the Suites for the ECM New Series between 1986 and 2002, interspersed with contemporary works for cello. This second look at the music is served as it were full strength and gives Demenga the chance to delve ever deeper into the full possibilities of expression the Suites offer to a master interpreter.

He very much rises to the occasion with a sort of inner insight into the music that is most rare. Yes, he is technically flawless at all times, yet this is no mere platform for cello artistry. It uncovers the kind of flowing inevitability of each movement with a conviction and an inner comprehension that sets these performances apart from the merely engaged performances we might hear today.

The phrasings come alive with just the right amount of rubato to heighten the gestural impact, but never to lose sight of the connectivity of Bach's musical language. Those movements that demand concentrated forward momentum both sing and drive ahead with exciting energy and poise. Those that are more contemplative linger with thoughtful emphases.

Demenga's  deeply rich, beautifully full woody tone comes across from the first bars of the music to the very end. Manfred Eicher captures it wonderfully well, so that the whole affirms a melding of cello timbral depth and musical affirmation.

If you can only have one version of Bach's perennial music, this could well be it. It would be my choice right now. Those who feel good about gathering a number of contrasting versions in the personal stacks might well choose this one too, as a synthetic marvel.
Posted by Grego Applegate Edwards at 6:39 AM