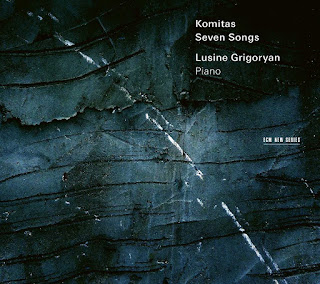 The Armenian composer Komitas Vardapet (1869-1935) has the distinction of being one of the most lyrical and folk-rooted "modern" exponents of the unforgettable character of the age-old Armenian ways of music making. Like the late Armenian-American Hovhannes at times, he translates the songful traditional idiom into classical terms while eschewing sentimentalizing or romanticizing strains.

We hear the unsullied purity of pianistic means that Komitas embodies so well on Lusine Grigoryan's recorded solo debut Seven Songs (ECM New Series 2514), which follows on the heels of Grigoryan and the Gurdjieff Ensemble's folk instrument Komitas renditions (ECM New Series 2451) that I happily covered when it came out.

The Komitas we hear on the present collection has a directness yet a well conceived pianism that makes full use of the inventively long melodic paths that wind their way through the music in minor diatonic freshness that in a very Armenian way contrasts with the Mid-Eastern and Eastern European raised seventh, harmonic vertically gestural minor modes we are used to hearing.

Five compositional groupings grace the program on the CD. It shows a Komitas firmly expository of Armenian essence, mostly simple but never facile, demanding a poetic interpretation Ms. Grigoryan provides with consistency and real eloquence. Thus we are treated to ideal renditions of the title collection "Seven Songs" plus "Maho Shoror," "Seven Dances," "Pieces for Children" and "Toghik."

The inspiration and melodic unfolding never flag. Lusine handles it all with a sparkling luminescence.

For all folk-classical minor mode aficionados, all lovers of things Armenian, all who love Komitas this is essential fare. Truly lovely!