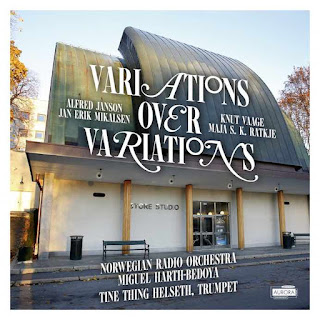 So much to hear out there. And then, something sneaks up on you. Boom! Variations Over Variations (Aurora ACD 5096) was a kind of boom for me. I did not expect it. I was glad to hear it. The Norwegian Radio Orchestra under Miguel Harth-Bedoya give us well shaped performances of four Norwegian works previously unknown to me yet adventuresome in the New High Modern zone.

We get the chance to familiarize ourselves with Alfred Janson's "Variations Over Variations Over a Norwegian Folk Tune," Jan Erik Mikalsen's "Songr for Orchestra," Knut Vaage's "Mylder," and Maja S.K. Ratkje's "Paragraf 112."

Through the many twists and turns that I make no attempt to describe here one constant weaves its way through it all--the Modern project whether tonal or expanded, an acute sense of line and timbre, an epic attention to involved orchestral eloquence. Every one of these works adds something good to what already has been.

It should be a joy to you if you  treasure the new consonance, the new orchestral possibilities. There is neither an acute striving after the very borders of the possible nor a conscious attempt to hold back the sluice gates of invention. A hugely satisfying sleeper is what we have here. Take a chance and listen closely! Very recommended.


Posted by Grego Applegate Edwards at 7:10 AM