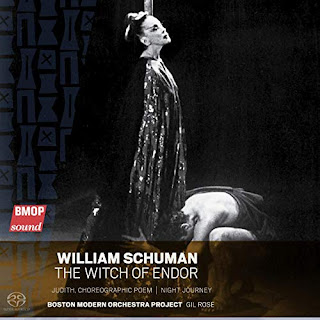 The recent Boston Modern Orchestra Project release The Witch of Endor (BMOP Sound 1062) exemplifies how and why the Project is such an important thing for Modernism in the USA past and present. It is a three-work mini-retrospective of the orchestra music of William Schuman (1910-1992), who might be somewhat in eclipse since his passing now some time ago, yet as we hear quite readily on this album, deserves to be appreciated and does not show the mark of time in his music so much as he seems more current than ever, to my ears at least.

I won't rehearse his biography in depth, but as a president of Julliard from 1945 to 1961, then of Lincoln Center from then to 1969, that he was New York born and bred, that he went to NYU like I did, in all that it was pretty inevitable that I came upon his music early enough and that he seemed naturally affinitive to me over the years. My first brush with his music must have been around 1970? So that was almost a half-century ago. If you were in and around NYC then and you kept your ears open, his music was there to be discovered.

And in that there is nothing remarkable in and of itself at this point in our musico-historical consciousness. He was something of an institution when alive. When no longer here his music must speak to us in itself or none of it matters.  And what is so reaffirming in the release at hand is that the three works chosen by BMOP for this release remind us of Schuman's brilliance as a composer, as an orchestrator, as a very inventive and original voice for the Modern scene in the USA of his time.

And, as I have come to expect from BMOP, the performances are in every way state-of-the-art, detailed and filled with an understanding sympathy.

It is interesting to hear these three works in this sequence because it affirms that Schuman was doing music in the vanguard of the times as early as 1947, in "Night Journey" and 1949, with "Judith, Choreographic Poem." Both works are at the edge of tonality. They occupy a niche not of course so much Pointillistic and Serialist, that was emerging in Europe then, but deliberately flowing, somewhat darkly pastel, alternately at rest and moving forward. It may have more in common with the "serious" side of Copland, with the American Symphonists of early-to-mid 20th century and perhaps Hindemith, all that more than with Webern and Boulez or for that matter Varese. It was a different lineage but nonetheless an important one still.

The involvement of this music and dance is dealt with admirably in the liners and you should read them if you are interested.

"The Witch of Endor" (1965) puts the capstone on the music with a very powerful and evocative orchestral meditation both brooding and Promethean in turn. It is masterful tone painting of a high order and reminds us palpably what poetic brilliance he evinced, what a vivid musical imagination he possessed.

It is a testament to the landmark service BMOP is rendering, to flesh out keenly and artistically the legacy US orchestral composers have given and are giving to the Modernist project. This volume along with an earlier volume of the music of Foss (index him for that review) are particularly outstanding. This one is a beautifully realized program of some very key Schuman. Molto bravo! Do not miss it.

Posted by Grego Applegate Edwards at 8:45 AM