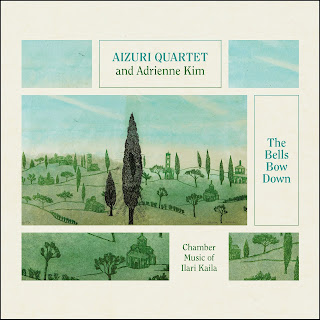 New Music in today's world as we know needn't follow slavishly some path marked out in, say, 1920. We may inevitably be tied to a rolling path from the past but we also put the movement into the trajectory by following what we hear today, individually and collectively. That certainly applies to Finnish-American composer Ilari Kaila (b 1978) and the album of his chamber music as performed by the Aizuri Quartet and Adrienne Kim, The Bells Bow Down (Innova 036).

Six works grace the album. And each one has a distinctive, personal character. There is a special sonance halfway between a sort of folkish diatonicism and some form of Radical Tonality. Gordon Kerry in the liners explains as aspect of the personal ways of the composer. "Much of his work is shaped by extra-musical stimulus: his grief for a lost friend, visual and aural images celebrating the natural world, a love of the (sometimes multilingual) punning title." And perhaps most importantly out of that impetus there is an originality of musical language that somewhat paradoxically sounds and feels natural, quasi-organic.

Kaila after graduating from SUNY Stonybrook with a PhD in composition in 2011 taught at Columbia University and was in residence as a teaching artist with the New York Philharmonic. He is now stationed in Hong Kong where he is composer-in-residence at the Hong Kong University of Science and Technology.

The Aizuri Quartet and pianist Adrienne Kim play the music as if they were born to it and perhaps in the end they truly have been.

All six compositions are in their own way gems. The folk-fiddling traces of the quartet "Jouhet" (2017) gives us a beautiful sort of jolt. The opening archaic harmonic sequencing of the title work "The Bells Bow Down" (2006) for quartet and piano leads to a stunning piano expression that the quartet responds to and we revel in some of the most memorable music of all of it, dedicated to the memory of pianist Hanna Sarvala.

As nearly all TV ads have it lately, "in trying times like these" bla bla bla. Truly though, this Ilani Kaila collection has the human touch, has some kind of hopeful quality to it, and reminds us if we need to be reminded that music has healing powers. So in that way it is most timely and most timeless at once. I do recommend this one strongly for the paradoxically rugged yet delicate lyricism. It bears up under repeated scrutiny and after a few listens seems like a friend. Kaila is a musical poet, a definite talent out there. This would I hope be as happy a discovery for you as it has been for me. Listen closely if you can. It's well worth your time.
Posted by Grego Applegate Edwards at 7:50 AM