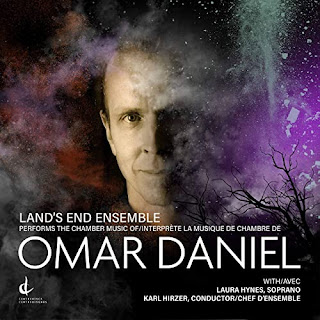 Modern chamber music is like blue cheese? If I say that people are going to think it is rotten but that is not what I mean. Instead I would say that Modern chamber might at first seem difficult to like by some, but if they stick with it they might find they like it better than something else, that they can come to know it as a thing special, not quite like any other thing?? To complicate matters there are a wealth of  Modern composers, so much so that perhaps unlike blue cheese there are enough varieties that one might be overwhelmed?

Never fear! I am here to make sense out of it, some of it. And happily because I listen to everything people send and choose the best of it I can help with names and albums you might never know about otherwise, along of course with a few you might already know something about, perhaps even a great deal.

So who is Omar Daniel? He is alive. He is around 60. He used to be enfant terrible of Canadian New Music? So the liners say anyway. I have no reason to doubt it.

The present disk showcases some four chamber works written between 1996 and  2018. They are mostly small ensemble works, filled with animation and a kind of flourish sometimes, some stridency certainly but harnessed to the outward expansion of gestures into the listener's space.

The "Duo for Violoncello and Piano" (2018) and the two Piano Trios (1999, 2015) all have a sort of rough hewn projection outwards that stands out as very Daniel-original and un-stinting. Each gives us a dramatic and  well thought-out piece that sounds increasingly more cogent the more one listens.

The two song cycle "Zwei Lieder Nach Rilke" (1996) is self-explanatory and not the least bit lesser an offering,. It stands out but with soprano bringing forward another sound and mood, as accompanied by a larger group of alto flute, English horn, bass clarinet, two percussion, piano, violin, viola and cello. The instrumental  ensemble sets the mood and the soprano expresses it directly.  It is notably the premiere recording of the cycle as well. Bravo!

All this fittingly and nicely celebrates Daniel's 60th birthday. Canada is all the better for him, surely, as are we all. The Land's End Ensemble with conductor Karl Hirzer does full justice to the music and the music in turn brings along to us in repeated hearings a joy of recognition. It is very Modern and very timely to experience if you currently exist in some pandemic isolation in search of revivifying sounds. But that will no doubt not make the music any less desirable after our health crisis has gone. I gladly recommend this one!

Posted by Grego Applegate Edwards at 9:51 AM