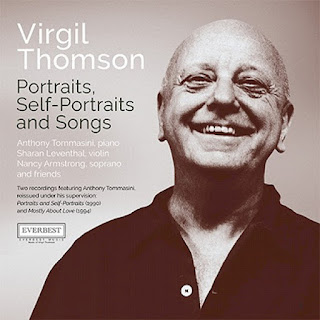 Virgil Thomson (1896-1989) never quite fit in with the usual categories of Modern music. He ordinarily was not particularly edgy in terms of tonality or rhythmic form; he was not a stereotypical Modernist in other words. There was often enough a disarmingly lyrical side to his music, a homespun quality as well. It may be sometimes a sort of allusion to Americana, like Ives and Copland but not sounding Ivesian or Coplandesque so much as expressing as he sometimes did the local, the familial, the everyday USA sort of feeling, the folk art feeling of a quilt or a sampler.. The newly re-released Northeastern Records early '90s albums Portraits and Self-Portraits and  Mostly About Love have some excellent examples of this sort of thing.  Both are happily back in print again as a 2-CD set Portraits, Self-Portraits and Songs (Everbest 1002 2-CD).

The performances are quite accomplished and present solo and modest-sized chamber configurations that feature, variously, Anthony Tommasini on piano, Sharan Leventhal on violin,  Nancy Armstrong, soprano, and their "friends" as needed. The first volume features a wide swatch, as the title of course suggests, of Virgil's musical portraits of friends, colleagues and the composer himself.

The works are relatively rare and in some cases these are the first recordings. The music is sometimes whimsical, filled with naïve and/or Neo-Classical elements, playful at times and memorably tuneful and at times with the charm of utter simplicity, other times more sophisticated.

Both volumes give us welcome works in vibrant performances, surely filling out with nicely done additions for the comprehensive Thomson enthusiast but also remaining of close interest for anyone who wants to follow and understand 20th century US styles and sub-styles. A very good re-release, timely and evergreen. Check it out by all means.

Posted by Grego Applegate Edwards at 10:43 AM