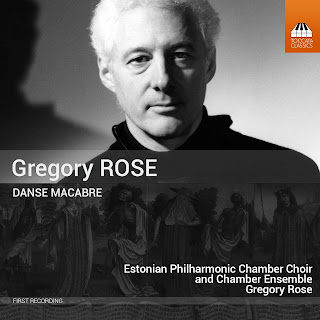 English composer Gregory Rose kindly sent me some CDs devoted to his music. Right now I've been listening to his Danse Macabre (Toccata Classics TOCC0284). This is an ambitious, detailed hour-long work for vocal soloists, the Estonian Philharmonic Chamber Choir, and the Estonian Philharmonic Chamber Ensemble, all conducted by the composer himself.

The music was inspired by a multi-paneled painting from the 16th century by Bernt Notke that is on display at the St. Nicholas Church in Tallinn, Estonia. Underneath each panel is a descriptive text in German underscoring the theme of the Danse macabre, the recognition that Death does not spare anyone but instead comes for all regardless of status or importance.

The music itself is quite expressive and essentially combines a nod to sacred music traditions in European musical history with a very Contemporary Modern feel that at times has quite an expansive semi-bitonal conflation and/or advanced harmonic-melodic development along with a vivid sonic palette.

What's remarkable about it all is the wealth of inventive movements, nothing patently derivative so much as a steady stream of originality unfolding in a wide swatch of idiomatic possibilities surrounding the grimly poetic or the poetically grim in meditations on death. It is a style both eclectic and original, a feeling of being in a new place that simultaneously acknowledges the near and distant sacred musical past.

The soloists and the collective give us a fittingly dedicated performance worthy of the musical content while being sympathetic and attentive to every nuance.

Anyone who loves the amassed vocal-instrumental arts in a dramatic setting will find this of interest no doubt. Listen!

Posted by Grego Applegate Edwards at 10:35 AM