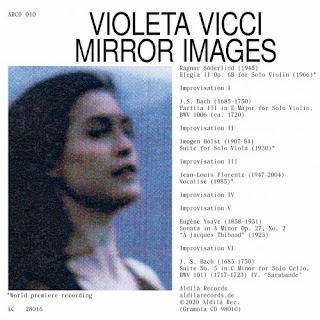 The present day listener, now no doubt as ever, ideally should habitually shake off the dust and cobwebs of preconceived notions of what to expect on the music scene. An excellent example of why that is so, of the happily unexpected can be heard in the recent solo violin-viola disk by Violeta Vicci, Mirror Images (Aldila Records ARCD 010).

Violeta dedicates herself to the solo violin-viola format and also vocalizes as part of her sonic palette (see below). She began playing at age 4; made her concert debut at age 15. She studied at the Royal Academy of Music under Howard Davis and Tomotada Soh, then at the Royal College of Music under Itzhak Rashkovsky.  She makes her home in  London. She performs regularly in the major concert halls and at festivals all over the world.

All that having been said, we turn to the crux of the matter, the Mirror Images program and its thorough mix of periods and ways, ultimately giving us a feeling of unity in diversity. So for example the Ysaye Sonata in A Minor Op. 27, No. 2 quotes Bach then reworks the "Dies Irae" Gregorian Chant for the dead. Vicci's "Improvisation VI" turns back to the chant with Violeta's haunting vocal and drones on the strings, and it all seems right.

The concluding "Sarabande" from the Bach Suite No. 5 for Solo Cello gets a viola transformation that sounds plaintive and meditative in its dirge-ish iunfolding.

Ragnar Soderling's 1966 "Elegie II" op. 68 for Solo Violin is a find, moving and somber yet heroic in its dignified unfolding of string parts played with deep understanding. It is the World Premiere recording, so all the better!

Bach's 3rd Partita for Solo Violin gets the intense working though it so richly deserves.

Vicci's six Improvisations have ambiance, string heroics and flourish, and make significant contrasts and creative frisson in between the written works.

So the Holst's 1930 "Suite for Solo Viola" gives us something that deserves to be heard more widely and flourishes at any rate in Violeta Vicci's hands, in this World Premiere recorded performance.

Another nice yet unexpected inclusion is the Jean-Louis Florentz 1985 "Vocalise," which gives us the tensile modernity of Violeta's pure yet intense voice all by itself.

When one lives with this album for a time as I did, one might well grow accustomed to the novelty of the combinatory choices and begin to feel their own special rightness. That's how it all struck me eventually.  And along with that recognition comes an appreciation of the strength of Violeta Vicci's invariably contemporary sound, her deep and poised execution and delivery.