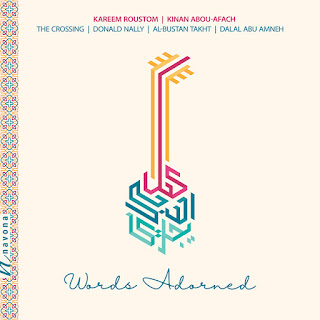 The combination of Classical elements and local musical traditions is nothing new. Of course you can go back to the earliest church music and sometimes find local song woven into chant form, or Papa Haydn taking on regional folk forms to suit his ends, not to mention musical Nationalism as it came into vogue in the later 19th Century through to the Modern era.

For all that the possibilities remain as open-ended as ever. As if to remind us of such things, there is a recent release of Andalusian-poetry-based music meeting New Music called Words Adorned (Navona NV6356).

Andalusia is the Southernmost community in peninsular Spain, which historically was where Moors once prevailed, ruling the region from the 8th to the 15th centuries. With them came a vibrant Arabic literature and music.

From that comes a forward looking musical program featuring the renowned choral group The Crossing under the direction of Donald Nally. Add to that the very capable instrumental ensemble Al-Bustan Takht consisting of oud, violin, drums, etc., and the very beautiful lead vocals of Dalal Abu-Amneh. All this is under the astute general musical direction of Hanna Khoury.

The music center around two song settings with composition-arrangements of Andalusian poetry. Kareem Roustom and Kinan Abou-afach each give us a compelling suite of songs that both takes inspiration from large group Andalusian music (at least as I have heard it) but also then interject elements of Classical Modernity. I have never heard a more interesting combination of old and new, classical and contemporary when it comes to the Arabic diaspora. The music is superbly written and excellently performed.

The program ends with "When He Appeared," a traditional Muwashshah very nicely played and sung. I believe I still have a recording of Oum Kalthoum doing this. The version here rivals that, which is saying something.

All goes wonderfully well in this program. I do not hesitate to recommend it to you highly. It will give you a musically astute extension of traditional Andalusian song into the present and future of Modern Classical.

Posted by Grego Applegate Edwards at 10:33 AM