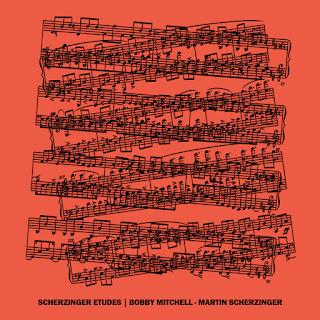 What New Music can be has become extended, become more opened up over the past 50 years so that one can never quite know what to expect next. That is not a bad thing. In the case of the music up today it is a very good thing. Scherzinger Etudes (New Focus Recordings FCR295) reads the type at the bottom of the cover. Look further inside at the liners and you verify that the composer is Martin Scherzinger (to spell out first and last names) and the pianist performing the Etudes is Bobby Mitchell. All that may mean something to you or possibly not--it depends of course on your. personal circle of compositions and artists.

What matters here of course is the specific composition and performance, both of which are outstanding. The music is not what you might expect in that it is unmistakably of our time, yet not "Modern" in the genre specific capital /M/ sense. In the most obvious sense this is not "bleep bloop" rangy Serialism, which is what one expected to hear nearly universally years back. It is tonal and it often has the full-expression keyful of music that Schumann, Liszt and Rachmaninov made their own. Yet the melodic-harmonic unfolding is more primal and post-Romantic, almost Folksy, Lisztian.

And most importantly the music sounds very comfortable being what it is, which is original and lyrically effusive while also being virtuoso oriented in the best pianistic sense. It is hard to play! And Bobby Mitchell sounds great in how he performs it with elan, with excitement.

The composer tells us in the liners that the music could be seen as a kind of "musique concrete topologique of found musical sound." By that he means that "These etudes are rewritings of the music of Schumann, Couperin, Paganini, Sgambati, Brahms and others." The music is subject to transformation as in a kind of musical "hall of mirrors" to give them a newness, a hearing "as it for the first time." Those insightful words help us undestand what the composer was after, and at the same time it does not at all take away from the originality of the music as we hear it. Not at all. And indeed the key is "as if for the first time," for that is absolutely the case.

It is an excellent example of how endless music can be. There is nothing new under the sun? No, we can never run out of possibilities and here is an unexpected one, a classic-in-the-making, an important work of interest to anyone who loves the piano, who loves the new, or for that matter, perhaps to anyone musical! Strongly recommended. Molto bravo!

Posted by Grego Applegate Edwards at 11:09 AM