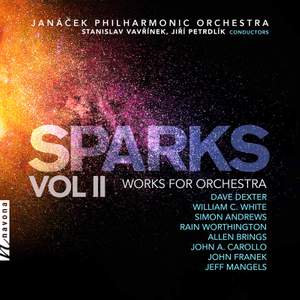 Sometimes an anthology in the New Music realm can let you explore a lot of New Music that you might not otherwise get a chance to hear. That is certainly true of a collection of works for orchestra entitled Sparks Vol II (Navona NV6337). On it we have eight relatively brief works by as many composers, all Contemporary, some covered previously on these pages, others not. The Janacek Philharmonic Orchestra under Stanislav Vavrinek or Jiri Petrolik do each of the works justice with earnest and lively readings.

Some of the works sound more relatively High Modern than others, though in common is a kind of orchestral Expressionism that is tonal with varying degrees of dissonance and melodic centralism. I found the best way to listen to this one was to relax all preconceived expectations as to what this sort of grouping might sound like. And then you get eight composers following their own muse. John Franek sounds the most Modern, and I have much appreciated Rain Worthington and John A. Carollo on these pages more than once--the new works by them here continue to intrigue my ears and form high points in the program.

On the other hand there are no "dogs" in the collection. Each composer has something substantial to say. And in the process you get to know something of the orchestral music of Dave Dexter,  William C. White, Simon Andrews, Allen Brings, and Jeff Mangels.

As the liners tell us, everything is of the 21st Century, all make up possibilities in Post-Modern music. The format of the miniature avoids typical concerns with long0form symphonic structure. And that is very refreshing in itself. Each composer puts him or herself into it and the program never flags, thankfully.

This sort of totality is what we come to expect from the Navona label (and Parma recordings in general). There is no nonsense, no compromise and an insistence on avoiding some kind of contemporary conformity. If you want to take a pretty deep dive into our current century, you cannot go wrong with this anthology. I am enjoying it myself. Very recommended.