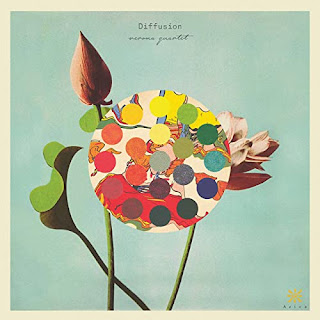 So much music keeps coming to us, the listeners. Yet dig we must for the buried treasures? Today like most days I have one that has gotten through to my ears and deserves attention. It is the recorded debut of the Verona Quartet in a program entitled Diffusion (Azica ACD-71339).

It is perhaps a truism that some works gain in comprehensibility after a certain amount of time, so that for example Stravinsky's "Rite of Spring" after a certain point became more comprehensible to great conductors and great orchestras, and so too to audiences, so that at least some performances in time made greater sense, had mastered the musical language of the work and thereby played out the whole with a fluid lucidity not previously heard.

Hold that thought for a minute while we cover the preliminaries of today's album. The Verona Quartet steps forth in a thematic way here. Diffusion plays upon the quartet's diverse cultural origins--Singapore, Canada, US, UK--and presents a program that in essence assumes, benefits from and encompasses the foursome's local folk roots and gives us a kind of cohesive picture of how they diffuse their own backgrounds and come to understand the corresponding elements in each of the three quartets featured in the program, namely Leos Janacek's String Quartet No. 2 "Intimate Letters," Karol Szymanowski's String Quartet No. 2 and Maurice Ravel's String Quartet in F Major.

I am not so familiar with the Szymanowski but it is a nice version and good to hear, very worthwhile in itself. The Janacek and the Ravel are both favorites of mine, melodic harmonic wholes made up of disparate parts, striking motifs that gather together in brilliant juxtapositions.

What seems remarkable to me on these performances is the detailed finessing of all the motifs and their seamless juxtaposition of all with all perhaps like never quite heard in this way. Hence my thought at the beginning of this article about how as time passes artists who are further on in the evolution of the modern classical world can express a whole with increasing sympathy and understanding.

In short the Verona Quartet's personal diffusion has made it possible for rather ideally ravishing readings of these most inventive Modern-vernacular exceptionalities. The time has come for the Verona Quartet and with their superb musicianship and interpretive brilliance I hope we can look forward to many years of greatness from them. Kudos and congratulations on such a fine debut! Listen to this one without fail if you can. Do not miss it.