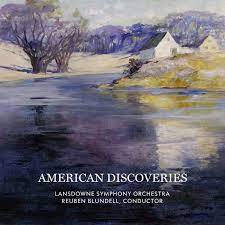 As time keeps moving forward we continue to be surprised by music we previously knew nothing about. Just lately I've been lucky enough to be sent a volume of such things, orchestral music from the last century by US women composers that turn out to be  worthy of our consideration. American Discoveries (New Focus Recordings FCR 286) is the matter-of-fact title of the album.

The music is quite nicely and respectably performed by the Lansdowne Symphony Orchestra under conductor Reuben Blundell. Each of the three works presented here have something distinctive about them, something individual and memorable.

There is an evocative miniature that has a feeling of pastoral Americana without being obvious about it--Priscilla Alden Beach (1902-1970) and her "City Trees" (1928). It is rhapsodic without being especially Romantic, descriptively noble, lyrical and rugged like trees, perhaps. It was premiered by the Rochester Philharmonic under Howard Hansen in 1928 while Ms. Beach was getting her MA from Eastman. Tragically most of her compositions have been lost.

That opener is followed by Linda Robbins Coleman's "For A Beautiful Land" (1996), which has a kind of pastoral Impressionistic Americana that goes quite well with the opener and refreshes with an inventive lyrical melodic sense like a sunny day in late spring.

The final work is longer, more modern in harmonic expansiveness--the 1976, five movement "Behemoth" by Alexandra Pierce. There is a kind of crisp post-Varesian logical inevitability to the music, and happily so. But it does not really sound like Varese so much as it partakes of sometimes similar spatio-temporal ideas of sound and silence.

I was not sure what to expect when I first put this one on. After a bunch of listens it feels like music well considered, maybe not always at the edge of Modernity but not looking backwards either. And all told the three works are a worthy addition to our ear-time activities. Nice! Thank you Lansdowne Symphony Orchestra and Reuben Blundell for taking care that we hear these works done properly. Happily recommended.

Posted by Grego Applegate Edwards at 9:39 AM