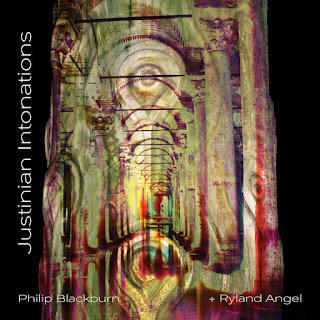 Since I began writing these reviews years ago I have come to know Philip Blackburn as an articulate, erudite and very capable head of the Innova New Music label and now in the same capacity for Neuma Records. He is a fine fellow and knows his stuff. I've also come to appreciate him as a composer of sonically and inventively innovative New Music. If you type his name in the search box above you will see a number of very positive review articles I've penned on his music.

And now there is a new one, a very worthy one entitled Justinian Intonations (Neuma 127). This one is an hour of sonically fascinating drone-sustain.

Now as I have been exposed to such things, there are a number of ways to go with a drone-sustain mode of composition. One is a glitchy, almost art brut primal quality. Neither the drone nor what goes with it is in this scenario deliberately sonically well-painted so much as it is elemental--not necessarily precisely so but vaguely like the old US land line telephone dial tone. My childhood growing up with that was my first and main exposure to everyday life drone sustain experience, though there were similar aural equivalents with electric fans and tv off-the-air test patterns. The same might be said of the old nuclear attack Emergency Alert civil defense multitone signal on TV and radio in the old days, sometimes even now. So in some ways hearing a piece in that glitchy primal mode may resonate for people of a certain age with the feeling on hearing those elemental signals growing up. Similarly Varese's "revolutionary" use of sirens in his percussion classic  "Ionization" sounded potentially a similar ominous feeling in the contemporary listener.

Another important sort of drone sustain zone can be first heard in the Fripp and Eno (and then later  just Fripp) works utilizing sustain psychedelic guitar long tones with or without additional electronics and featuring sophisticated employment of digital delay.

Philip Blackburn's Justinian Intonations occupies a somewhat different realm and does so beautifully well.  A hint of what that is about can be gathered from the cover image, a stylized abstraction assembled around a visual image of an old, vastly cavernous cathedral. Those who know the wonderful sustained echo of such places will recognize a hinting at a kind of aesthetic, Early Music element of what sustain-drone music can be today--paralleled with the direct drone-longtone ways of Medieval Organum and Eastern Orthodox chant, both of which of course are built upon a drone foundation.

The beautifully complex color timbral sound of Blackburn's music resonates with those foundations without directly calling them up. Ryland Angel's vocal part, as an added meaning-color has definite chant and Early Music recollections. The wide spectrum of the total sound of the electronic-acoustic-electric totality gives us a kind of New Music analog of those earlier sound modes. There is pronounced timbral coverage and a complexity of tone soundings that rivals the orchestral modes we of course are so familiar with as Classical listeners. It does not in the last instance try to simulate directly  the orchestral possibility though. It remains firmly and "exotically" electroacoustic-electronic.

Time passes in this music like any other, but it is not at all a tedious time. Things change, they are often enough linear and sometimes quite gradual but never does it feel like a loop-de-loop as much as a kind of sacral time, the entire sequence feeling ultimately like a magical ritual, a rite of sound so to speak.

It is a contemporary New Music that unfolds naturally, organically, without some marked self-conscious newness. I've now listened to this program many times and it still seems fresh and naturally, emphatically ethereal, supportive and eventful in a gradualist way.

Bravo! Listen to this one without fail if you like a bit of the Universe in your musical kingdoms! Strongly recommended. Blackburn is a vital force in the music today.

Posted by Grego Applegate Edwards at 11:30 AM