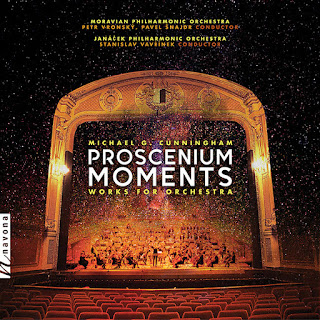 Composer Michael G. Cunningham is not a household name of course. Nonetheless his music is very worth knowing. I have had the chance to listen to and review a number of releases devoted to his music (type his name in the search box above for those).Today we have a volume of his orchestral works to consider, in a CD entitled Proscenium Moments (Navona Records NV6314).

The music covers some five original works plus arrangements-orchestrations--of Bach on "A Bach Pre-Symphony" and Faure's "Nocturne No. 6 Op. 63." These two are definitely nice to have and hear but the main attraction centers around the originals.

So we get a choice selection of earnestly Modern works, with thoughtful skill in orchestration, melodic lucidity and harmonic advancement--from the dodecaphonic reminiscent "Impromptu"  (1999) to a wide swatch of slices in time and musical space beginning with the "Counter Currents" (1966) a later "Time Frame" (1980) and "TransActions" (1980) and then a spring forward with an insistently mesmeric and exploratory Modernity-Postmodernity of "Symphony No. 7 (A Cummings Synchrony)," Op. 293.

The vivid impression one gets by listening to this program (very well played by the Moravian Philharmonic under Petr Vronsky and the Janacek Philharmonic under Stanislav Vavrinek) is genuine inventive brilliance along with a sure vision of orchestral sonarity. None of this is in a backward-gazing, retrograve  mold so much as it assumes the accumulated past and goes it all one more, makes a Cunningham of it all.

As the liners tell us. he has been amassing an important body of works since 1958. A close and thorough listen to this volume might tell you what it does me--namely that Cunningham is a US composer of stature, deserving wider acclaim and continued performances. Anyone who welcomes new music will doubtless find this enjoyable and informative. Very recommended.

Posted by Grego Applegate Edwards at 11:17 AM