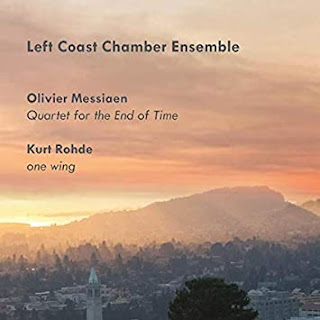 The first recording I encountered of Olivier Messiaen's beautiful "Quartet for the End of Time" was a late '60s Angel LP as played movingly by Michel Beroff, Gervase de Peyer, Erich Gruenberg and William Pleeth. It became the benchmark by which I compared subsequent recordings. It remains so. Just now we have a new recording by the San Francisco based Left Coast Chamber Ensemble (Avie AV2452) along with a short but perfect compliment to the work, "one wing" by Kurt Rohde.

The Left Coast Ensemble as featured in this new release consists of  Jerome Simas, clarinet, Anna Presler on violin, Tanya Tomkins, cello, and Eric Zivian, piano. This surely is a quartet especially well suited to the work. More on that in a minute.

The circumstances of the coming into being, the genesis of the work is key to apprehending its content. Messiaen was confined in a Nazi Concentration Camp. Remarkably Messiaen rose up out of the horror of his circumstance to write and first perform the work while a prisoner.

The apocalyptic theme of course resonated with to horror of Nazi ascendance. We live in very different times of course now, yet with the pandemic and other upheavals it may occur to some that another apocalyptic possibility is upon us? Messiaen's response seems as timely as it was on its first hearing. It is of course a thoroughgoing expression of his faith and his Catholicism, so that there is hope and transcendence in spite of it all. That this work stands out still as one of the chamber masterpieces of last century and one of Messiaen's most greatly loved works testifies to its beautifully wrought staying power whether you listen with some kind of awareness of the liturgical-mystical roots of the expression or just revel in the melodic and rhythmic brilliance of it all, the declamatory fervency of its dynamic confluence.

The Angel LP of the Quartet that has been a centerpiece of my listening over the years is perhaps slightly less overtly bold, less underscored, less emphatic generally compared to this version. The rhythms are accentuated with the Left Coast edition, there is still a deep passion to it all but just a little more immediacy. It is an extraordinary disk in its own right and with the bonus extra, the eloquent world premiere reading of the Rohde "one wing" (for violin and piano) it is almost as if there is a new last movement to follow--so much does it seem as of a piece in its own way.

If you do not know this Messiaen masterwork here is a good place to hear it. If you already do, this makes a nice contrast with the Angel version. Either way I recommend it very much.