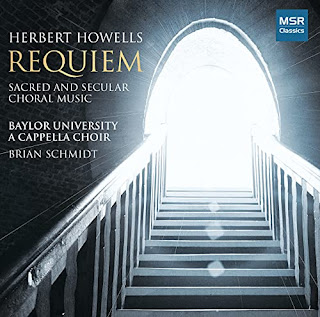 If you ever took things for granted, chances are in the last year or so that you no longer do? And so music remains central if you are like me, but there is no guarantee, you understand, that it will all be there for you as you are for it? The Pandemic has made it very difficult for live music, and if it is coming back all the more does it seem precious, Happily recorded music never exactly went away! And so I turn to an album I've gotten recently that is getting my ears focused.

And so we have an absorbing disk of a cappella choral music, centered on Herbert Howells' Requiem (MSR Classics MS 1757). The Baylor University A Cappella Choir under Brain Schmidt do the honors and they sound  nicely angelic and/or robust, depending on the work at hand.

The most ambitious of the compositions and the most interesting is no doubt the "Requiem" of Herbert Howells (1892-1983). It combines a hovering, post-chant influence of early church musc with English folk roots and a modern sense of space perhaps. It will no doubt appeal to the modern-anglophile contingency, in the English neo-renaissance of choral unfolding from the time of Elgar to Vaughan Williams and so on.

The remaining nine works are in a miniaturist mode of brevity and concentration. Thee are older classics from the likes of Tomas Luis de Victoria and Felix Mendelsohn, then an interesting assortment of 20th century and beyond works by a variety of composers, all working in a rooted tradition that may include a tang of modernity but just as much or more a feeling of thoughtful continuity.

So we encounter interesting works by the likes of Enrico Miaroma, Alexander L'Estrange and Susan Labarr are some of the composers. It all makes for compelling fare, none of it exactly at the cutting edge of the new, but rather earnest choral moments worth savoring, very well sung.

If you love the a cappella choral sound and want something unfamiliar and worthwhile, this will no doubt appeal to you. I am glad to hear it. Kudos to the choir and director Brian Schmidt.