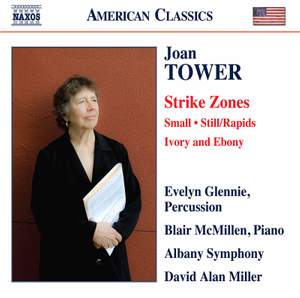 Sometimes when it is a matter of New Music an anthology of various composers and works can be quite illuminating, but as far as any given composer goes it may not definitively carve out the stylistic territory as she or he has patterned it. US penom Joan Tower (b. 1938) has been productively in anthologies I have heard, some reviewed here, but happily she has also had several solo Naxos disks I have covered--one orchestral, one a collection of string quartets (type her name in the index box above for those).

The works are all relatively recent, one from 1993, the rest from 2001 to 2016. It shows Joan Tower seriously focused in a concerted zone, more or less.

The delicate "Small" (2016) gives us a brief but concentrated solo percussion universe that intelligently provides a virtuoso, microscopic sort of sound patina.

"Strike Zone" (2001) is a percussion tour de force excellently played by Glennie and an orchestral part that expands it all sonically into layers of fanfarish Modern expression, especially the animated later part with dramatic timpani and rapidly moving xylophone lines, then a busily dramatic snare and timpani (plus toms?) and brushes cadenza that has wonderful dramatic momentum.

Modern harmonic meditative  beauty in the piano and answering reverie in the strings starts off "Still/Rapids" (2013/1996) in  a very captivating way. It is extraordinarily beautiful, then later quite motility-oriented in the "Rapids" section. It all fits and sounds great.

"Ivory and Ebony" (2009) brings the curtain down on the program with a sensitively feelingful agitation-peace contrast that shows off McMillen's poetic pianism in a wonderful way.

This volume joyfully reaffirms Joan Tower as a leading light of New Music today. Catch it!