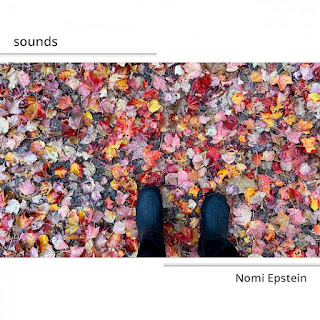 US composer Nomi Epstein appears before us on a CD album with six compositions for solo piano and a few for small chamber configurations. The album is aptly titled Sounds (New Focus Recordings FCR260). Sounds is a meaningful title as Ms. Epstein's music gives us a heightened attention to the timbral qualities of tone production. It is also music that to some extent has the element of process, a semi-ritualized doing in patterns neither redolent of classical or song modes of unfolding (e.g., abacaba), rather coming to us with relation, at times repetition as abstraction, at times long tones and deliberate, open ended soundings that hang together like fantastic canvases in sound--in timbre-tone--where modern abstract visual art would use pigment.

The overall presence of the music including the repetitions are ambient in the manner of later Morton Feldman rather than, say, Steve Reich.

The trio of Frauke Aubert on voice, Shanna Gutierrez on bass flute and Francisco Castillo Trigueros on live electronics have special sonance on the 2016/19 "for Collect/Project." is simply gorgeous,a living breathing sound being that quietly maps out a path to a deep space inside us. It unfolds without a lot of repetition, through-composed cosmic tones it has in abundance.

The 2018 "Sounds for Jeff and Eliza" makes a beautiful sonance for Eliza Bangert, flute, Jeff Kimmel, bass clarinet and the composer at the piano. Long tones alternate in ways that iterate same and altered, change and stasis in ways that are exceedingly beautiful if you allow them to open to you.

This music has the kind of depth that perhaps is the antithesis of the "popular." That is not to say that it does not open the listening self to sheer aural expressivity, with a widely spatial lyricism that is not literal in the way it "means," but nonetheless  has much to understand in the way it straddles the inner aural self and a potentially infinite outward spatiality.

If you give this one enough listening frequency it should pay you back with a profoundly meditative inner space when you return to each new listening session. In this way it affirms that there are indeed places to go beyond the American School of Cage and Feldman. Highly recommended.

Posted by Grego Applegate Edwards at 10:32 AM