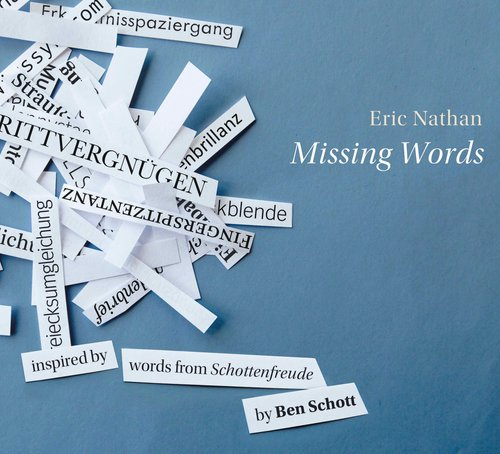 Based on the volume I have been listening to with some joy, composer Eric Nathan shows himself to be a Neo-High Modernist of true inventive thrust. The album at hand is the chamber series contained on two CDs and entitled `Missing Words (New Focus Recordings FCR 314 2-CDs).

The idea of the music is that when English fails, one might switch to German, and if that fails, music should step in to give us in poetic clarity the complete thought message. As you listen, or as I did anyway, the programmatic idea lives on in the main as an inspiration for the series of six works. And as you listen you feel a musical narrative that you understand apart from any words.

The six works cover a full gamut of instrumental possibility from cello and piano (Parry and Christopher Karp, respectively) to the Boston Modern Orchestra Project as conducted and directed by Gil Rose. I do not think a blow-by-blow description will substitute for the experience of lingering  within this cornucopia of music--and that is fitting since the idea is that music says what words cannot. In general though keep in mind this is a Modern sort of vocabulary, at times rooted in a sophisticated tonality and then expanding to a more spacious plethora of note relation choices.

What most strikes me about this series of Nathan's works is indeed how fluid, eloquent and assured is each of these works. This to my mind presents a series of works whose importance I suspect will in the years to come be a very memorable part of the music of our time. And it obtains that rather lofty spot in my ears in the most natural of ways. I do recommend this album highly.  It is most original fare, played with poetic assurance. Anyone who values the "new" in New Music should experience delight in hearing these works. By all means check this one out!

Posted by Grego Applegate Edwards at 11:04 AM