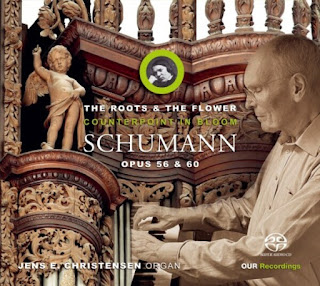 The Classical label Our Recordings celebrated its 15th anniversary recently, and I must say they have done some wonderful things in the years I have been reviewing Classical and Modern music (type their name in the index to see my reviews). A recent album of theirs that gives me another reason to rejoice  is called The Roots & The Flower: Counterpoint in Bloom (Our Recordings 6.220675), which in fact is Schumann's organ music Op. 56 & 60 as played with gravitas and heroic liveliness by Jens E. Christensen.

We may sometimes forget that 19th Century composers ordinarily had a good deal of Counterpoint as part of a well-rounded education. No surprise then when we remember Beethoven's Scherzo as the second movement of his 9th. Then of course there was his Grosse Fugue, which is also an amazing achievement regardless of what era we might compare with it.

If these examples readily come to mind, it is less known that Robert Schumann's organ music opus 56 & 60 are master examples of counterpoint as Schumann addressed it. So the 12 deeply ornate examples as we can hear them on this album will no doubt please you who appreciate masterful counterpoint as it sometimes existed happily in the Romantic period.

After a fair number of listens you feel (if you are like me) that Schumann gave us his best here, even if not in any typical way for him. It is the closest thing you'll come to imagine Schumann had he composed in the Baroque era! It is a fascinating and a very rewarding listen, Strongly recommended.