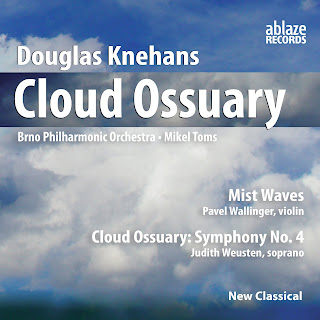 Living and thriving composer Douglas Knehans exemplifies a certain aspect of New Music today. That is, he does not attempt to occupy a genre so much as to create the music inside him. His latest album gives us that in all its finery, Cloud Ossuary (Ablaze Records ar-00062).

It is a program very well played by the Brno Philharmonic Orchestra under Mikel Toms, Pavel Wallinger nicely appearing on solo violin, with a beautifully wrought soprano performance by Judith Weusten for the single movement that calls for the vocal part.

The album contains two vibrant and essential works, A brief but mysterious "Mist Waves" for solo violin (Pavel Wallinger) and Douglas' "Cloud Ossuary--Symphony No. 4" which is a major work of our present-day to my ears.

When I listen to Douglas Knehans' music (type his name in search box for more reviews) I come away with the feeling that the music coming out of him has a kind of organic singular inevitability--that he has a full-blown melodic-harmonic-orchestrational personality that is eloquent and original, that speaks directly to one's listening muse in ways that keep you focused on the flow of lyric and dynamic articulateness.

So the symphony builds in the three movements very beautifully contrasting sound evocations of clouds. Each fulfills a will to form, so to speak, a sincere expression of the experience of cloud-dom. And too in the best ways the music is lucidly a commentary on itself, on its self-presencing service of looking out upon the world as a musical human. Maybe that seems obvious but this music succeeds in expressing the musical self in a complete and satisfying way and, perhaps, not all that many composers you can say that of. A key is the sureness of orchestration, almost a kind of second nature of one who has explored the inner realms of sonic possibility in considerable depth.

So the contemplative continuance of "Mist Waves" works within itself as a complete being, as does the rhythmic unfolding of the first movement of the 4th, "The Ossean Cage." Then we get transported to the gorgeously hovering sustains of "Breathe Clouded" And then the longer final centers upon the beautifully apposite soprano floating above a singular series of orchestrational aural poems. It is a rich and complex tapestry of a movement, something to sink into with absorption.  For a moment you may call to mind the gargantuan enormity of a Mahler, the orchestrational sensuality of a Ravel, but then no, this is music of the present, music of the present as fertilly imagined by Douglas Knehans, not quite Modern in the typical way, nor a backward leaning in a reverse mirror on it all. It is K-n-e-h-a-n-s.

And that is a wonderful thing to me. Dive into this one of you will. There is much to live with, to grow into. Bravo!

Posted by Grego Applegate Edwards at 11:08 AM