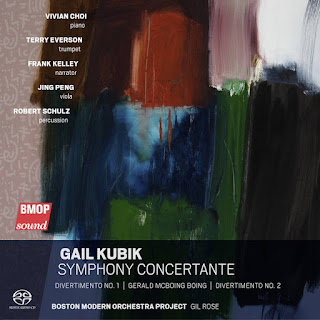 Gail Kubik (1914-1984) I've heard something of over the years, but for whatever reason I did not take notice much. And as is the case with many of the Boston Modern Orchestra Project releases, there is a nicely chosen, excellently performed anthology to be had now and it alerted me to what I was missing.

The album features four orchestral works from the '50s: the Divertimento No. 1 and 2 (1959, 1958 respectively),  "Gerald McBoing Boing," narrated by Frank Kelley, percussion by Robert Schulz (1950),  and the titular "Symphony Concertante" for Trumpet, Viola, Piano and Orchestra, with Vivian Choi at the piano, Terry Everson at the Trumpet, Jing Peng at the viola (1951-1953) (BMOP Sound  1085).

It is a kind of happy meld of a Neoclassical Modernism beholden to, but without imitating Stravinsky in that mode, and then the slower middle moment which is lingeringly,  tonally tempered in a poignant feeling of reflectiveness. Listen to the concerted soloists on the "Symphony Concertante" and you will enter an exceptionally inventive world.

The highly puckish, wonderfully orchestrated first Divertimento opens the program with a magnificent textural beauty, some playful Bach quotations and an absolutely charming way about it. Start with this one if you want to sample it and know what to expect

Each work has Kubik's personal stamp. The "Symphony Concertante" provides the deeply accomplished and expressive climax. Perhaps this '50s period may not have afforded him the recognition he deserved because there were several rather unflexible formulas applied to evaluating the Modernism of the day and Kubik did not quite fit either mold. Now we can listen without firm expectations and see how nicely eloquent and original a figure he was.

After lingering with this program a while I am happy to hail it as something special, both from a compositional and a performance point of view. Gail Kubik needs your attention, your consideration, surely. This album stands out as a happy reason to hear him.