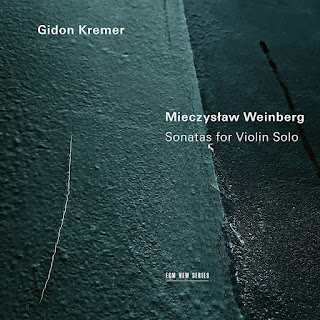 When done well, there is something about a modern work for a solo stringed instrument, or for that matter earlier, equally focused ones, like some heartening Bach for violin or cello. In recent years the music of Polish-Russian master Mieczyslaw Weinberg (1919-1996) has been getting at last the attention it deserves as exemplifying an original and compelling compositional voice that extends the legacy of the local brilliances of Prokofiev, Shostakovich, etc. And there is a realization the more we hear it all that he was a real influence, not just somebody who was influenced.

The remarkable Sonatas for Violin Solo (ECM New Series 2705) as played with a brilliant dedication by Gidon Kremer, manages to be a great set of examples of Weinberg's chamber excellence as well as some of the real gems of Modern solo string music. The three sonatas (written in 1964, 1967 and 1979,  respectively) combine in Weinberg's special way the simultaneous recurrence of slavic diatonics with interrelated edgy chromatic stridency and tension, all of which ratchets up or down according to the compositional flow..

The release comes to mark Maestro Kremer's 75th birthday and some 40 years collaborating with ECM Records. The care with which Kremer brings this to us in every way helps us celebrate the milestone occasion with the Master.

Kremer gives us highly focused, loving, highly articulated attention to the myriad details and levels of development that the music exhibits so creative-poetically throughout. Kremer in turn expresses an emphatic dynamic and at times a tender playfulness that breaks the music up into contrasting dialogics.