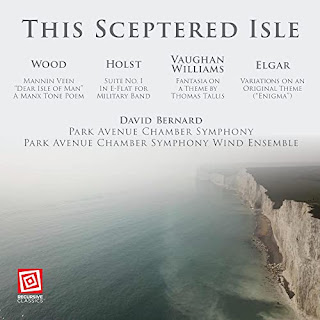 There is often enough something pastoral about the composers of the English 20th Century Renaissance. It is mostly music for any or all seasons but it sounds especially inviting in the spring to me. More or less simultaneous to the French Impressionists, the English like the French built ornate, beautiful musical soundscapes. The English could at times channel their own folk musical strains and that in part distinguished them from their French contemporaries. I've long been a fan of that period ever since I bought a copy of Vaughan Williams' Sea Symphony on two LPs at Two Guys From Harrison, a very New Jersey sort of store when I was young, now long gone.

The program is a balanced selection of two staunchly admired examples of the current standard repertoire, namely Vaughan Williams' "Fantasia on a Theme by Thomas Tallis" and Elgar's perennial "Variations on an Original Theme Op. 36 'Enigma'". These are contrasted by two sympathetically treated works a bit less known these days, namely Haydn Wood's "Maunin Veen--'Dear Isle of Man'--A Manx Tone Poem," and Gustav Holst's "Suite No.1 in E-flat for Military Band, Op. 28A."

What the Park Avenue outfit lack in a finished polish they make up for with an articulated enthusiasm that befits the kind of populist earthiness of the music. In this way you might imagine how the premiere performances of these works might have sounded, as something excitingly NEW.

And so also it befits the homespun local and sometimes folkish thrust of the music, especially in my thinking the Wood and Holst works.

The swelling harmonic poignancy of the Vaughn Williams "Fantasia" sounds granularly soaring as well it should. The Elgar "Enigma Variations" has a kind of immediacy that suits the work quite well and every detail is firmly supported by the sureness of sequentiality as is a must for such variations.

And if there are some occasional imperfections in the totality, if sometimes the intonation has a moment or two of slight uncertainty, at the same time this is heartwarming in its singular devotion to making all come alive. There may be better performances of the Elgar and Vaughan Williams out there, but the Wood and Holst works are in scarce supply and these versions give us the whole cloth of where they move into, what a sublime transformation of local strains into the style of Modern Anglo-Symphonism. And as a whole these four works sound like they belong together because they do, they play off against one another and help you understand the parameters of the stylistics then.

And in the end I do recommend this one for its respectable readings of Anglo gems and other works deserving our attention. Hear hear!

Posted by Grego Applegate Edwards at 8:54 AM