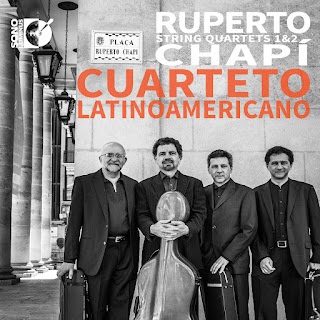 A month or so ago I reviewed the String Quartets 3 & 4 by Spanish composer Ruperto Chapi (1851-1909) as performed nicely by the Cuartetto Latinoamericano (see review page from February 1, 2022). Happily the record company then sent me the quartet's initial volume of String Quartets 1 & 2 (Sono Luminus DSL-92185). I've been listening to these and I must say they sound every bit as good as the third and fourth ones.

What seems especially noteworthy is the endearing Neo-Classical, vibrantly Spanish melodic rhythmic effervescence of these, almost like a later-day kind of Scarlatti of the Harpsichord Sonatas, something of the captivating Spanish dance-like exuberance. and eloquent spinning of musical tales of those solo works, only not so much imitative as parallel, as a product of the later time period without an excess, without that much of the Romantic sentiment some works of this era of course exhibited. In these works like the later quartets Chapi puts his own personal identity to it like a kind of musical set of fingerprints.

As the program plays repeatedly I grow increasingly happy with how captivating is Chapi's version of the Spanish tinge (as Jelly Roll Morton referred to it). It is distinctive but in every way filled with the kind of forward striving beauty of Spanish earthiness. And as you contemplate this aspect of the music you might realize as I have that Scarlatti and Chapi compare with one another in part as a dual set of nearly timeless qualities of Spanish musical identity. The music in both cases defies when it was written, at least in part.

The liners explore the historical fact that after Boccherini the string quartet in Spain underwent a sort of eclipse in part because there was virtually no string quartets concertizing local works in the country until  1901 and the formation of the Quarteto Frances in Madrid. Ultimately it helped encourage a flowering of the medium in Spain, with post-Romantic works penned by del Campo (some 14), some by Tomas Breton, one by Turina and then the four by Chapi. The liners underscore Chapi's appreciation of Grieg and Tchaikovsky but foremost his immersion in the Spanish vernacular. That makes a bit of good sense of the experience of the Chapi opuses.

The performances seem to me of the benchmark sort, very much brimming over with enthusiasm and vibrancy. And these first two quartets stand out as very worthy of our time and attention. Put all four together in the two volumes and you have something that should appeal  to anyone who wants to explore more from the 20th century Spanish realm. I am not giving you a blow-by-blow description of the music as it moves through its assigned movements because I think you will appreciate what it is of course primarily by listening but also because the general ideas I penned here are what will I hope allow you to gauge whether this music is for you. I do recommend it highly. I am happy to have both volumes in my collection. Give this music a hearing if you can. Bravo!

Posted by Grego Applegate Edwards at 9:56 AM