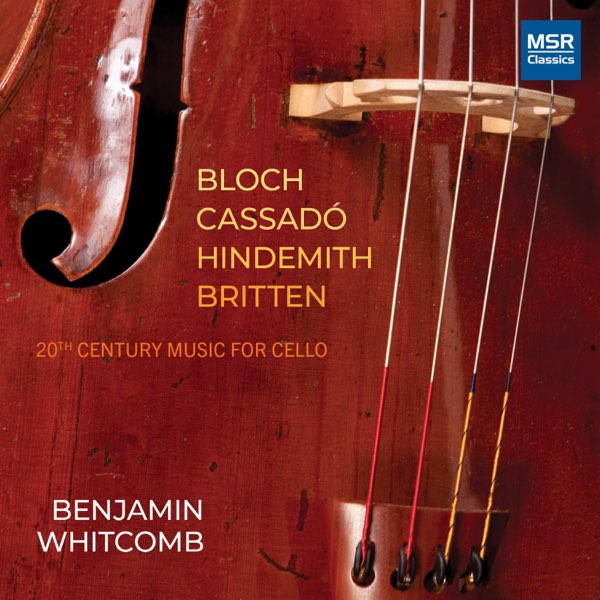 Perhaps to some the idea of music for unaccompanied cello is something esoteric, off the beaten track. But it is more the case now than not that the repertoire is being represented on disk far more than it might have been 50 years ago or so. A very good example is the music before us today, with cellist Benjamin Whitcomb in a nicely turned volume of 20th Century Music for Cello (MSR Classics 1798), covering relevant works by Ernest Bloch, Gaspar Cassado, Paul Hindemith and Benjamin Britten. Some may recall or even have his first volume in the series, which I reviewed with pleasure here this past April, 2020.

The first thing one might note on listening is the finely granular readings and masterfully commanding performances of these works by Benjamin Whitcomb. He is not in any way attempting to grandstand his way through these pieces, but rather seems purely inspired by the music and responds with a deeply detailed, middle ground between the far end of expressionism and the somewhat contrasting one of unrelenting abstraction. None of these works are in the High Modernist panoramic breadth of leaps and bounds (i.e. twelve tone or atonal, very dissonant and/or fully dedicated to a kind of anthematic post symmetrical infinity of unfolding. Nor is this music in Whitcomb's reading filled with Romantic  sentimentality. So in that way Maestro Whitcomb's response seems exactly right for the music, and in fact he is more a composer's faithful representative than a cellist's cellist, so to speak, at least as I hear it.

My ears over the numerous listens I have given this program perk up especially at the rendering of the stand-up, complex striations of the Paul Hindemith "Cello Sonata, Op. 25, No. 3," an exemplary work from his ambitiously contemporary early period (1922) in Germany. Each time I hear the sequence of works the Hindemith stands out nicely as a high point among high points.  So too the Benjamin Britten "Suite No.1" expands the tonal center outwards and sounds more Modern in that way than not. The nicely spaced and open field melodic unfolding gives us a kind of poeticism not at all programmatic and so a typical but satisfying venture into art for art's sake, so to speak.

And both works as done with panache by Benjamin Whitcomb take on a special life and become memorable in all their complexities, as a music that reminds us of itself the more times we hear it--which after all is what music should ideally be in contexts where it is all about carving out a musical landscape of some sublimity and uncompromising strength.

Yes and then the opener by Ernest Bloch, "Suite No. 1 for Unaccompanied Cello" (1958) has something of a Semitic quality that is subtle yet distinctly there to appreciate as you pay attention to how it plays itself out, minor and ornate and expansive.

Then we have something by a composer less known to us, one Gaspar Cassado (1897-1966) and his "Suite for Solo Cello" (1926)--in its own way very declamatory, articulate, fanfarish and deliberately dramatic and outreaching. Then follows a folk-like dancing moment before a concluding melding of song and fanfare. It all is nicely satisfying.

Perhaps this is not the kind of album you would see is out and say to yourself, "I've got to have this one!" But when you play it enough you realize you are lucky to experience it, that it is a special thing any "Modernist" and cello appreciator will be glad to have to hear often, I suspect. So please give it a listen and perhaps it will makes its way into your musical being like it did for me. Recommended!

PS See the April 7, 2020 article for a discussion of the previous volume of Whitcomb playing 20th century Modern repertoire for unaccompanied cello.