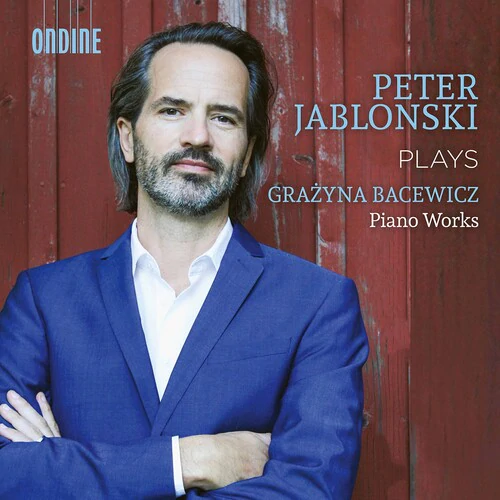 Polish composer Grazyna Bacewicz (1909-1969) is an important Polish Eastern European Modernist that I have only come to know musically in the last few decades. In that way I am not unlike many New Music appreciators in the US. It took some time before we got to hear her music. And it turns out it was very worth waiting for.

An excellent example is a new disk by pianist Peter Jablonski, Bacewicz Piano Works (Ondine ODE 03992). When one encounters such fare, of course one hopes the works are stimulating and the performances enthusiastic yet precise, or something like that. I must say this volume gives us both and therefore establishes itself as an important advancement on the average person's knowledge (that would include me!) while also giving the solo piano music enthusiast some fare that fully deserves emergence into the light of day.

What perhaps is most striking to me is how firmly pianistic all are and then also how she is an original contributor to the lively Eastern European developments of Modern times through extending the idiom while also reflecting something of the earthiness of a nationalist folk influence represented in oblique traces and shades. You have an original stance but then you might note an affinity with the unfolding of the Slavic potential to the notes we have to work with, including the Expression-laden open harmonic captivations of Scriabin, in the related period works of Prokofiev, Shostakovich, Weinberg, Bartok, Janacek, and the like. She fits in originally with her own take on the possibility of the earthy yet new.

It is a damn fine album. Listen!

Posted by Grego Applegate Edwards at 7:32 AM